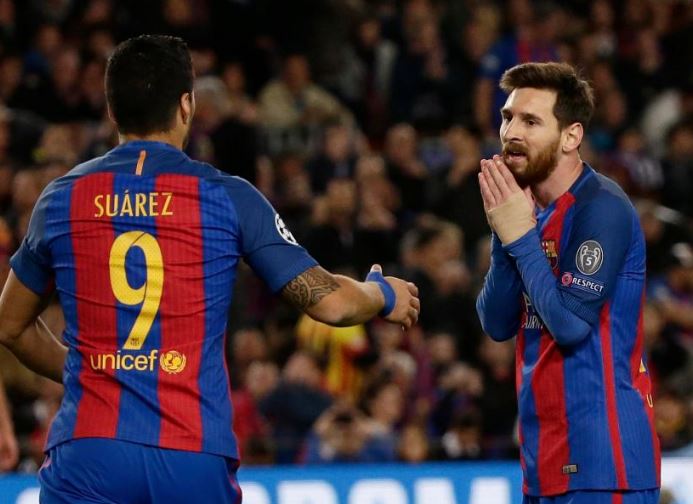 Barca Knocked Out of Champions League For The Second Straight Time

Juventus produced an exceptional defensive performance to reach the semi-finals of the Champions League after stopping Barcelona from scoring at the Nou Camp.

Trailing 3-0 from the first leg, Barca peppered the Italian goal but failed to repeat their last-16 heroics when they overturned a first-leg 4-0 deficit to beat Paris St-Germain.

This the second straight time that Barcelona is eliminated out of the Europe’s most prestigious club football competition.

Lionel Messi, who had earlier been denied by Gianluigi Buffon, fired wastefully over the bar while Luis Suarez and Neymar also spurned chances on a night Barca were restricted to one shot on target.

Juve’s Gonzalo Higuain fired tamely at Marc-Andre ter Stegen and Juan Cuadrado missed another chance but the final whistle was celebrated wildly by the champions of Italy.

The Italian champions are now 180 minutes away from the final in Cardiff on 3 June after a superb defensive performance as Barca and their formidable strike force failed to score over two legs.

Juventus were as brave and aggressive as they were calm and disciplined with Leonardo Bonucci and Giorgio Chiellini monumental at the heart of the defence.

When Barca did manage to carve out chances, Suarez, Messi and Neymar failed to deliver.

All three had chances before the interval. In the space of a few minutes, Suarez had a goal-bound shot blocked, Messi dragged a chance from 12 yards and Neymar volleyed wide.

It said everything about Juve’s defensive display that Buffon only had one save to make, the 39-year-old denying Messi before the Barca forward hammered the rebound into the side-netting.

Yet Juve, as adventurous going forward as they were solid at the back, might have beaten the Spanish champions for the second time in a week.

Higuain should have done better from close range after a ball over the top before Cuadrado flashed a chance narrowly wide on the counter.

In the end it did not matter, Juve and their travelling fans celebrated a night to remember