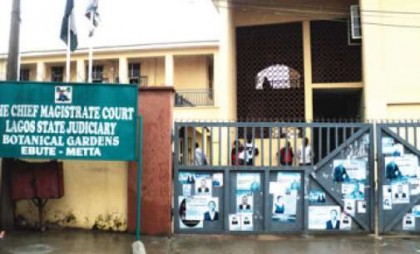 An Ikeja Magistrates’ Court on Monday sentenced an unemployed man, Kehinde Adeoye, 25, to two months imprisonments for stealing a cell phone and laptop.

The Magistrate, Mrs I. O. Raji, gave the verdict after Adeoye pleaded guilty to a three-count charge of conspiracy, burglary and stealing.

Raji held that Adeoye should serve the imprisonment with hard labour and without an option of fine.

“The court finds you guilty as charged and you are hereby sentenced to two months imprisonment with hard labour and without an option of fine,” Raji ruled.

Adeoye resides at Iyana-Ipaja, near Lagos.

Earlier, the Prosecutor, Insp. George Nwosu, told court that the Adeoye committed the offences with some people now at large on April 18 at Ige Street, Iyana-Ipaja.
He said the accused burgled the apartment of one Monday Utibe and stole his laptop, valued at N75, 000 and a cell phone, valued at N5, 000.

“The complainant and his brother were asleep at about 3: 00 a.m. when he heard some noise.

“He got-up to see what was happening and he saw that the accused had gained entrance into his house through the window.

“He raised alarm and with the assistance of neighbours, the accused was apprehended when he wanted to jump the fence, while others escaped. The stolen items were recovered,” he said.