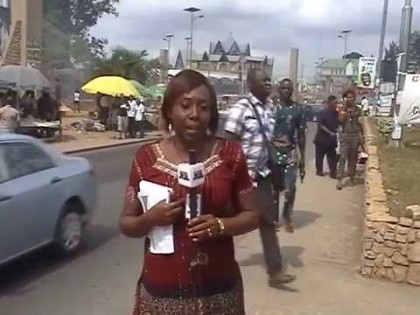 Two members of NTA Osogbo news crew Tope Alabi and  Tunde Adigun were attacked by angry mob at Ede where they were covering the story on the death of Senator Isiaka Adeleke.

Correspondent Adeniyi Taiwo who himself escaped being lynched at another location in Osogbo reports that the camera chain of the station was destroyed.

The All Progressives Congress (APC) has received news of the death of the first civilian governor of Osun State and APC Senator representing Osun West Senatorial Zone, Senator Isiaka Adetunji Adeleke with shock and grief.

A statement by the national publicity secretary, of the All Progressives Congress, Mallam Bolaji Abdullahi described the deceased as a detribalized Nigerian, a democrat, an astute grassroots politician and philanthropist who distinguished himself in all positions of service he occupied.

President Muhammadu Buhari has commiserated with Osun State government and members of the national assembly on the passing away of senator Isiaka Adeleke on Sunday.

In a statement in Abuja Presidential Spokesman Femi Adesina says President Buhari sends his condolences to the family and friends of the gentle and kind hearted former governor of Osun State who had passionately and relentlessly championed the cause of the less privileged and most vulnerable in Nigeria.

Nigeria and the people’s republic of china have been long standing partners. For almost fifty years, both countries have shared bilateral trade relationships. The Chinese Ambassador to Nigeria, Dr Zhou Pingjian, says he is optimistic there are enhanced grounds now to widen the scope of the relationship.

Nigeria’s diplomatic relationship with the people’s republic of china dates back to the early 197o’s.

It is one bilateral relationship that many believe have evolved faster than any other and have also made far reaching impact.

In a bold move to prevent and eradicate illegal ownership of small arms and light weapons, the presidency has started drawing up the rules of a whistleblower mechanism to throw a spotlight on the regime of gun ownership and control in the country.

A statement by the Senior Special Assistant to the President on Media and Publicity Garba Shehu says in line with presidential directives, the National Security Adviser, Maj-Gen. Babagana Munguno has begun work on a template for the discovery and recovery of illegal weapons through a reward system.

As troops of 1 Division recover large cache of arms in Southern Kaduna state, the recently launched operation Harbin Kunama ii by the Nigerian Army in southern part of Kaduna State which will cover some forests in Bauchi, Kano and Plateau States has started to yield the desired result as troops of 1 Division Nigerian Army recover large cache of arms and ammunition in southern part of Kaduna State on Saturday 22nd April 2017. The discovery was made when troops embarked on cordon and search of Gwaska, Dangoma, Angwan far and Bakin Kogi general area of Southern Kaduna State.

President of the Senate, Dr. Abubakar Bukola Saraki, has reacted to the death of two-term serving senator, Isiaka Adetunji Adeleke, a development he described as a sad personal loss.

Saraki, in a statement signed by his Special Adviser on Media and Publicity, Yusuph Olaniyonu, described Senator Adeleke — the first elected governor of Osun State — as an important figure in the eighth senate.

Speaker of the House of Representatives, Yakubu Dogara, says the National Assembly in particular and Nigeria in general has lost a colossus.

In a statement issued by his Special Adviser on Media & Public Affairs, Turaki Hassan, the speaker describes late Senator Adeleke, the former Osun State Governor as a distinguished gentleman.

He says Senator Adeleke was a leader who left giant footprints and lasting legacies as the first civilian governor of Osun State,” he stated.