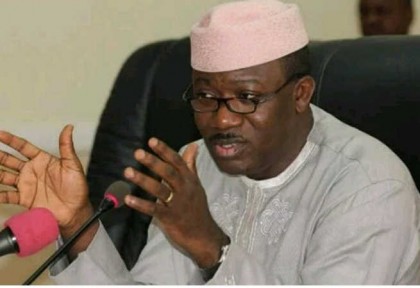 Minister Of Mines, Dr Fayemi On Human And Environmental Safety

The Federal Government has directed mining operators to ensure environmental and human safety to avoid lead contamination during mining.

Dr Kayode Fayemi, Minister of Mines and Steel Development, gave the directive during a visit to the Royal Salt Lead and Zinc Processing Company at Enyigba community in Abakaliki on Tuesday.

According to Fayemi, in as much it is a win-win process, the Federal Government would not accept any mining investor across the country to operate without taking considering environmental sensitivity and sensibility.

He, however, said the company had submitted environmental protection plan to the ministry on how it would reclaim and protect the environment, but the ministry would monitor the whole processes to ensure no stone was left un-turned.

Fayemi expressed appreciation of the company’s efforts in processing minerals lead and zinc being exploited, rather than exporting them raw, which had benefited the country.

“One of the primary interests in the ministry’s road map is to increase the level of beneficiation and processing to ensure raw minerals are processed locally rather than exporting them.

” This will create jobs for the youth, which the company had taken step to employ over 400 Nigerians in the state,” he said.

He urged the company to employ more locals than foreigners and train them on jobs that expatriates were doing, to take charge of their responsibilities.

The minister also urged the company to meet the demands of the host community and legitimate revenues being charged by the federal and the state to ensure smooth operations of its business.

Gov. David Umahi of the state who was in the minister’s entourage to the company’s sites, said that it acquired 500 hectares of farm land for mining.

Umahi said the operations had  devastated the state’s vegetation, ecosystem, adding that the state had not made revenue from the company.

He advised the company to comply with all its obligations to the state and the host community to avoid loosing the land.

He also urged the state Commissioner for Environment to take water from the boreholes drilled by the company to a reputable laboratory to ascertain that it was free of lead.

Mr Vassu Gowda, the Project Manager of the company, assured the minister and the state government that it would comply with all the terms and conditions.

The two ministers of the sector had embarked on a nationwide tour to all mine sites, to build stakeholders’ confidence, get feedback from them, identify challenges and proffer solutions.