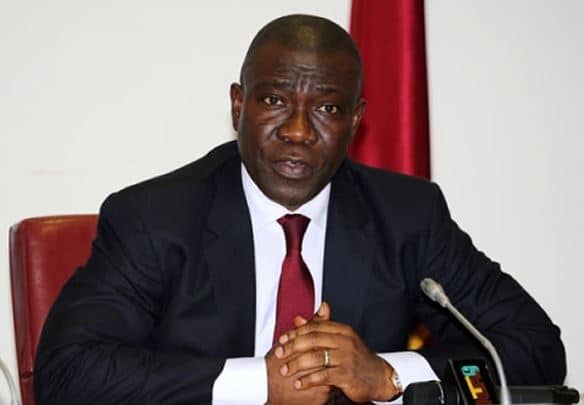 The Deputy Senate President, Senator Ike Ekweremadu, has commended the Federal Government, and some states for giving serious consideration to his suggestion for the extension of the whistle-blower policy to the proliferation of illicit arms in the country.

He gave the commendation while responding to question by reporters on the move by the government to implement his suggestion and how to address connected concerns such as human rights infringement, misuse of whistle blowing for political witch-hunt, and contemplation of compensation for whistle-blowers on illicit arms.

Ekweremadu, however, explained that it was up to the government to design a clear framework for whistle-blower policy in general rather than treat each issue in isolation of the other.

He said: “First, I commend the federal government and some states who are already buying into my suggestion to apply the whistle blower policy to addressing the challenge of proliferation of illicit arms and mindless killings all over the place.

The Deputy Senate President said that the general framework of the policy should cut across corruption, illicit arms, kidnapping, and terrorism.

He also suggested that compensation should be predetermine, not necessarily on the basis of percentage, and apply it across board from a pool of fund set aside from percentage deducted from recovered loot.

“That is to say that whatever compensations or motivations should be paid from recovered loot, irrespective of the crime a whistle is blown on”. He said.

The Senator, however, called for “consequences for false alarm, witch-hunt, and mischief.”

“We must ensure that information are thoroughly investigated before the law enforcement agencies strike and that those who give false information get at least three month imprisonment without an option of fine.

According to him, “We have had many instances where traders blew the whistle on their colleagues in the big markets because they are doing better than them; there has also been instances where people’s homes are broken into and various parts of their homes destroyed in search of non-existent loot due to willful misinformation, and we must take steps to discourage this and any form of political witch-hunt”.

Ekweremadu, however, warned that the whistle-blower policy should not be permanent, but a temporary means to arrest the ugly trends of corruption and violent crimes in the country as well as orientate Nigerians on the need to furnish government agencies with the intelligence needed to wage war against crime.

Ordinarily, every Nigerian owes the state the obligation to see something and say something. But that culture is lacking, hence the need to reorient and motivate citizens over a given period of time.” He said.

It can be recalled that Ekweremadu had made the whistle-blower policy suggestion while contributing to the Senate’s debate on the report of its ad hoc committee on Southern Kanuna crisis.