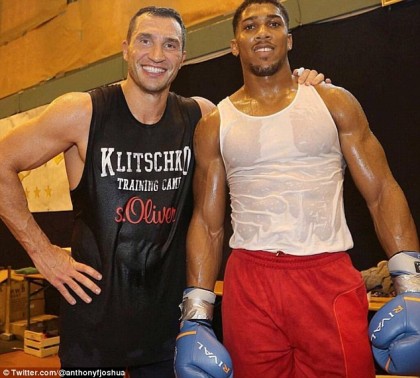 Anthony Joshua has said his 13 weeks of preparation has pushed him to a whole new level ahead of his world heavyweight title fight with Wladimir Klitschko at Wembley on Saturday.

The 27-year-old Joshua, who is unbeaten in 18 bouts since turning professional in 2013, said he was not concerned about the punishment he could take in the ring because of his high-intensity training programme. Also Read; Athletics Coach Advises FG To Rehabilitate IDPs, Almajiris Through Sports

“I’ve been pushed to places I’ve never been pushed before,’’ Joshua told the BBC. “I think I take more punishment in the gym than I do in fights.

“Sometimes I try things and they don’t work and I’ve broken my ribs, my hand, dislocated shoulders in the gym but we get it right for the fight.

“I’ve been training under the dark light so I can shine under the bright lights on April 29.’’ Also Read; NPFL: Shooting Stars Sports Club Defeats El-Kanemi Warriors 1-0

Klitschko, 41, who went unbeaten for 11 years before losing the belts to Tyson Fury in 2015, has 64 wins against four defeats.

He will be hoping to seize Joshua’s IBF crown as well as the vacant WBA and IBO titles.

Joshua expects a tough fight and saying, it will be one of the defining fights of his career when he faces the Ukrainian in front of the largest British boxing crowd for nearly 80 years.

“It is one of them. If this was towards the end of my career, I would say: “This is the defining fight that’s going to write the history books,’’ the London 2012 Olympics champion added.

“He’s coming game, he’s coming ready, and the body does what the mind tells it. His mind seems to be in the right place so I’m in for a tough fight.’’ (Reuters/NAN)