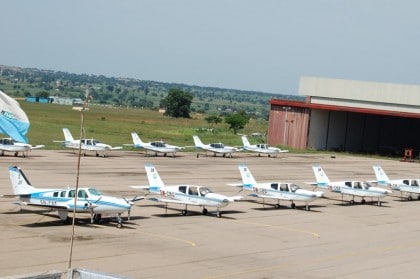 With the dynamic nature of the aviation sector in views and getting to grips with quality manpower development, the Nigerian College of Aviation Technology Zaria, has announced receipt of trainer aircraft. Minister of State for Aviation, Hadi Sirika was there to explain how the new generation aircraft is expected to provide students with up to date knowledge on airpower capability.

24th-30th April every year is celebrated as African Vaccination Week, to raise awareness on the importance of full vaccination through life and remind African leader of their commitment to provide patent vaccines and ensuring that vaccination becomes a right to the eligible.

The Nigerian Television Authority has been commended for setting the pace for television broadcasting and promoting journalism profession in the country.

When a delegation from Daily Stream Newspaper visited the Director General of the NTA in Abuja, the challenge of maintaining professionalism, objectivity and patriotism were highlighted.

Daily Stream Newspaper is yet another addition to the plethora of newspapers in the country working to inform the public and hold to account those in leadership positions.

The delegation was at the NTA to formally seek partnership with Africa’s largest TV network the NTA as the newspaper is formally presented to the public.

The ECOWAS court of justice has adjourned the judgment of the case between Dorothy Njemanze and three others versus the government of Nigeria.

Reports say that the plaintiff is demanding a hundred million naira as compensation for alleged damages to their reputation.

The Kano Emirate Council has refuted the allegation making rounds in the social media and some news papers that it squandered four billion naira since the enthronement of Emir Muhammadu Sanusi II.

As the Nigerian military continues its operations in the northeast, aggressive intelligence gathering has been advocated to be backed with high level diplomatic ties on security with neighboring countries.

This is the stand of the Bangladesh Chief of Army Staff, General Abu Muhammad Huq during a lecture at the National Defence College, Abuja.

Reports say that the three sureties must include a serving senator, a Jewish religious leader and a highly respected personality with landed property in the federal capital territory.

The presidency has reacted to a statement credited by a former military governor of Kaduna State, Colonel Abubakar Dangiwa Umar (RTD), in which he accused the government of President Muhammadu Buhari of being unfair in the war against corruption. A statement by the Senior Special Assistant to the President on Media and Publicity Mallam Garba Shehu says by now, President Buhari’s Administration is quite familiar with the barrage of verbal attacks that have accompanied the administration’s determined war against corruption.

The House of Representatives has paid tribute to late Senator Isiaka Adeleke describes his death as huge loss to Osun State, national assembly and Nigeria in general.

The legislators who reconvened after a two week Easter break stepped down all items on the order paper in honour of the late senator from Osun State.

Senate Adjourned in Honour of Adeleke

The senate adjourned plenary after returning from two weeks recess in memory of a departed colleague Senator Isiaka Adeleke.

Moving the motion for the adjournment at Tuesday’s Plenary, senate majority leader Ahmed Lawan extolled the virtues of the late senator.

After adjournment, Senate President Bukola Saraki led principal officers and others to sign a condolence register.

Some of the lawmakers spoke to senate correspondents.

Vice President Yemi Osibanjo has renewed the call for international collaboration aimed at tackling the menace of terrorism , emphasizing the commitment of Nigeria to cooperate in global fight.

The Vice President made the call when he received the Bangladesh Chief of Army Staff,General Abu Muhammed .