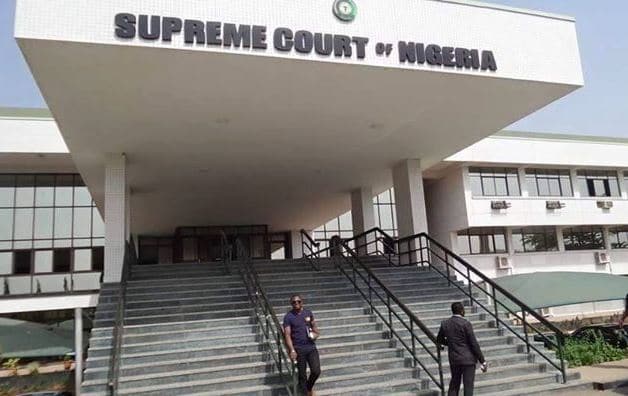 The Attorney-General of Kwara and the Governor are the applicants in the appeal.

The Chief Justice of Nigeria, Justice Walter Onnoghen led four other justices of the court to unanimously agree on the decision.

“The law is settled that at interlocutory stage no court, whether trial or appellate, is allowed to delve into the substantive matter in the pending mater and decide it.

“The court below had done that which is prohibited in our jurisprudence.

“It’s decision and all the orders made touching the merits of the originating summons, being null and void, are herby set aside.

“The case is hereby remitted to the Chief Judge of Kwara to be heard `de novo’ by a judge of the court other than Justice E.B. Mohammed,’’ Eko held.

Justice Eko, however, ordered the parties to bear their costs.

The respondents being the claimants had approached the Kwara High Court with an exparte motion seeking an order to bring this action in a representative capacity for themselves and on behalf of 9,024 pensioners.

They had also asked for an order to deem the originating processes filed in representative capacity as properly filed and served.

Justice Mohammed who presided finding that the application had merit, granted it as prayed on Oct.20, 2008.

In view of that decision, leave was granted to the claimants, now (respondents) to bring the action against the defendants, now (appellants) in a representative capacity.

The originating summons filed on Sept.20, 2008 in terms of the motion exparte was deemed properly filed.

In the circumstance, on Oct. 30, 2008, the appellants, as defendants, entered a condictional appearance to the suit pursuant to Order 16 Rule 1(1) of the Kwara High Court Rules.

The State Counsel, Mrs F.I Lawal had filed the process on behalf of the state, but the defendants, according to the apex court did nothing further to articulate their defence.

Eko said, the claimants had through their counsel, Mr T.O.S. Gbadeyan filed a motion for judgment in terms of their claim as contained in the originating summons.

The claimants’ action, however, prompted the appellants’ application filed on Jan.23, 2009 praying for extension of time within which to file their counter-affidavit in defence of the originating summons.

The motion for extension of time file by the appellants was moved and granted on Jan.26, 2009.

The appellants, as the defendants in the trial court were then given up to Feb.2, 2009 to file their counter-affidavit and Notice of preliminary objection.

The appellants in compliance with the said order of court filed the two vital processes on Feb.2, 2009.

Meanwhile, on Feb.19, 2009 when the court re-convened, the appellants withdrew the notice of preliminary objection file on Feb.2, 2009.

To the dismay of the court, the appellants file yet another notice of preliminary objection on Feb. 23, 2009.

The trial court had gone ahead to entertain and decide the preliminary objection filed on Feb.23, 2009.

The court held that the claimants’ action was statute barred and that they lacked locus standi to bring the action in representative capacity.

It was against this decision that the claimants on June 9, 2009 lodged their appeal to the Court of Appeal in Ilorin.

The Court of Appeal had heard the appeal on April 19, 2010 and in its unanimous decision delivered on June 30, 2010 allowed the appeal.

The claimants as appellants in that court had invited the appellate court to invoke Section 15 of the Court of Appeal Act and decide the originating summons on its merit.

Dissatisfied with the judgment of the court of appeal, the appellants, who were respondents at the lower court, filed notice of appeal with six grounds to the apex court.

They had urged the court to decide whether Order 14 Rules 2, 12 and 13 of the Kwara State High Court Civil Procedure Rules, 2005 was applicable to the facts and circumstances of this case.

According to them, the court should decide if  the rules give the court power to order substitution or addition of parties s`suo moto’ and the respondents to amend their originating summons without formal application.

They also asked the court to decide whether the appeal court was empowered under Section 15 of the Court of Appeal Act, 2004, to determine the merit of a case which was wrongly instituted by originating summons.

The further asked that apex court to decide whether there was sufficient evidence for the court of appeal to have granted the reliefs claimed by the respondents (Claimants) on a proper interpretation of Section 210 of the Constitution.

They further asked the court to decide if the court of appeal did comply with Section 10 of the Kwara State Pension and Gratuities Law of 1994 as amended while making it decision on the case.