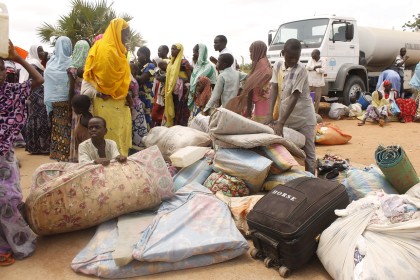 The National Logistic Committee on Distribution of Relief Material to Internally Displaced Persons (IDPs) has called on agencies to always ensure sanity among residents.

Mr Abdulkadir Azarema, Chairman of the committee, told the News Agency of Nigeria (NAN) in Benin, Edo state on Monday that this would bring about harmony and peace.

” The issue of social menace, we are happy here, the pastor has told us that there is no social or sexual harassment between IDPs and there are no cases of diseases.

‘’Nevertheless in other places we have had some cases. Also Read; Customs Distributes over 136,000 Bags of Rice to IDPs …

“The agencies responsible for maintaining camps; the state government, National Emergency Management Agency (NEMA) and health officials should put hands together to ensure that IDPs camps are secure from insurgency.

“They should make sure it is protected from internal problems like conflict between IDPs, conflict between security agencies and social workers and the issue of sexual harassment should be curtailed.

He said that the Federal Government was making efforts to ensure that IDP’s return to their various communities.

Azarema said that the military, police and other security agencies had complimented the efforts of each other to ensure security in such communities.

He added that the IDP’s, however, have an option of deciding the appropriate time to leave the camps.

“The ones in Benin particularly, we have heard from them that some of them want to stay here to complete their education which they have started.

“So we cannot say that they must go back since they have an ambition to accomplish their education. Also Read; National Human Rights Com. Collaborates With UNHCR To Address Humanitarian Needs of IDPs

“We are glad they are getting support from the state government and other donor agencies,’’ he said. (NAN)