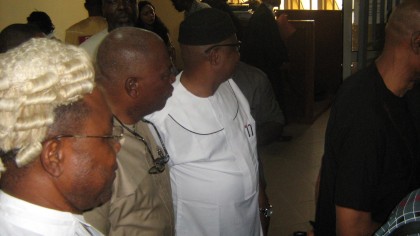 UCTH Medical Director At The Court

The Economic and Financial Crimes Commission, EFCC, on Monday presented its first prosecution witness, in the trial of the Chief Medical Director of the University of Calabar Teaching Hospital, UCTH, Professor Thomas U. Agan, and four other persons allegedly involved in an N85 million procurement scam, before Justice I. E, Ekwo of the Federal High Court sitting in Calabar, Cross Rivers State.
The four other defendants in the matter are: two staff of the Teaching Hospital: Ofor Jonan Ofor, Head , Works and Engineering and Francis I Utu, Chief Administrative Officer and Head, Legal Services. The other two are : Okocha Anthony and Emmanuel Etta Nkim who are both promoters and owners of Anchor Industrial and Construction Services Nigeria Ltd and Basemark Energy Nigeria Ltd, respectively: the two companies allegedly used to perpetrate the fraud. Read Also; Sokoto State Attorney General Has No Right To Take over EFCC’s Case

At the commencement of hearing of the matter on Monday, counsel to the EFCC, Kayode Oni, presented the first prosecution witness, Isaiah Yusuf, an assistant director with the Bureau of Public Procurement. BPP. Yusuf told the court that sometimes in 2015, his organisation received a petition from Messers Metropolitan Motors, alleging that the UCTH did not follow procurement procedures in the purchase of a Life Support Ambulance and a Toyota Coaster Bus.
He told the court that upon the receipt of the petition, the BPP looked through the documents and discovered that the companies indeed did not qualify as they did not meet the bid requirement and were therefore ineligible. He said he visited the Teaching Hospital in Calabar to inspect the two vehicles that were purchased and took photographs of the vehicles. However, an attempt by the prosecution counsel, to tender some documents which included the petition and photographs of the vehicles was opposed by the defence counsels, Mba Ukwueni, a Senior Advocate of Nigeria, SAN. Ukwueni submitted that the documents were not certified and that they were photocopies. His argument was supported by the second defence counsel, Tawo E. Tawo, SAN , who said the documents failed admissibility requirements
The prosecution witness was questioned by the defence counsels , on whether his organisation, Bureau of Public Procurement, BPP, educated the UCTH staff on the rules and guidelines of the BPP. In response, Yusuf said he could not give a concise answer as he was not in the Training department and so could not ascertain whether they have carried out sensitisation at UCTH. He was also asked whether UCTH was sent the rules and guidelines of BPP, Yusuf said it was the Secretary to the Federal Government that issues circulars to government agencies and institutions from time to time.
The second prosecution witness presented by the EFCC, Elegbede Olamide, a staff of Mandillas Motors was not allowed to testify as the defence counsel challenged his appearance in court on the grounds that his name was not in the proof of evidence as a witness. Ukwueni said the name of the person in the proof of evidence was Morufu Lasisi and not Elegbede Olamide and so he could not stand in place of Lasisi. Though EFCC counsel argued that both men were from the same organisation, Justice Ekwo adjourned to Tuesday for the EFCC to present its witness as listed in the proof of evidence.
Professor Agan and his two colleagues are alleged to have used their position to corruptly influence the award of the purchase of a Life Support Ambulance vehicle and one Toyota Coaster Bus to Anchor Industrial and Construction Services Limited and Basemark Energy Nigeria Limited, by inflating their costs and without following due procurement processes to the tune of N85,062,000.00, thereby contravening the public procurement Act 20
The
defendants were arraigned on 3 April, 2017 on a five- count charge bordering on alleged conspiracy, bid-rigging, abuse of office and breach of due process contrary to Procurement Act 2007. The defendants pleaded not guilty to the charges upon arraignment.