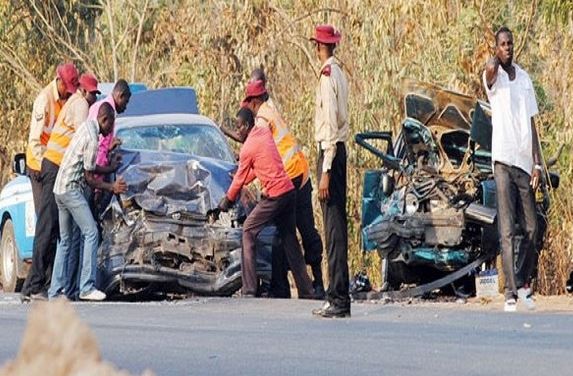 Speeding Responsible For 60% Of Road Accidents In Nigeria

Oyeyemi said this on Sunday at a thanksgiving service to mark the 4th United Nations Global Road Safety Week at the Church of Christ in Nations (COCIN) in  Gigiriing, Jos, Plateau.

The theme for this year’s global event is “Managing Speed”.

Oyeyemi represented by Mr Oludare Fadogba, the Zonal Commanding Officer, Jos zone, said speeding remains the most prevalent cause of road crashes in Nigeria and across the globe.

“Speeding is one of the most prevalent causes of road collision and attendant fatalities in Nigeria and even globally.

“The risk of crashes occurring is greater as speeding gets higher.

“Statistics shows that speeding and the involvement of commercial vehicles consistently account for about 60 per cent of road traffic crashes in Nigeria.

“This is why the Federal Government has to endorse the implementation of the mandatory installation of the speed limit device on commercial vehicles to curtail accidents, “he said.

He called motorists and all road users to key into the speed limit regime with a view to reducing loss of lives and properties from road accidents.

In the vein, the Sector Commander of Federal Road Safety Corps in Gombe, Mr David Mendie, said reduction of average speed by mere 5 per cent could reduce fatality of accident by 80 per cent in an event of automobile crash.

Mendie, stated this during a Thanksgiving service at the Saint James Catholic Church, Gombe, marking the end of United Nation’s 4th Global Road Safety Week and added that a credible research had proved so.

He said that based on the findings, the need for road users to adhere to the recommended speed limit, could not be over-emphasised.

According to him, FRSC in Gombe has intensified campaign on the need for motorists to manage speed while driving.

Mendie said the Command had embarked on motorcade rally and delivered lectures to commercial vehicle drivers on the advantages of controlling speed through the use of speed limiter device.

FRSC also embarked on similar sensitization campaign in mosques on Friday throughout the nation.