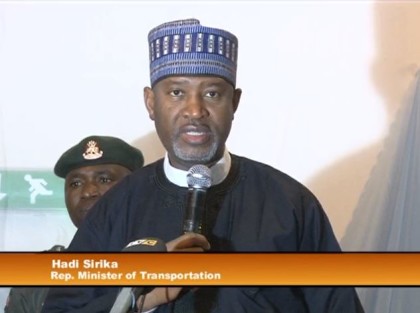 The Minister of State for Aviation, Sen. Hadi Sirika, says the Federal Government under President Muhammadu Buhari is committed to equipping the nation’s aviation security (AVSEC) for optimum performance.

Sirika stated this at the graduation of 35 Nigerian aviation security Master Trainers by the United Nations Counter Terrorism Centre (UNCCT), on Friday in Abuja.

He said that the determination of the government to enhance aviation security in the country was responsible for the resolution of the Federal Executive Council to allow AVSEC personnel carry arms. Read Also; FAAN Bags The Aviation Industry Agency Of The Year, 2017

The minister added that aviation security had become a very important issue since the 9/11 attack in the U.S. in 2001.

According to him, the world has changed completely by the action of 9/11 because, since then, air travel has not been the same and it will never be the same again.

“This event is very important in our lives because for the first time the UN had passed a resolution on aviation security.

“Security is very important in aviation because since I became minister, I have remained focused on that I would change the aviation security.

“I promised that I would change aviation security and I wrote to Mr President on the need to change it and make them more equipped to carry arms.

“FEC has passed a resolution that AVSEC should now carry arms with high sense of civility,’’ he said.

Sirika also commended the UN for passing a resolution on aviation security and selecting Nigeria as the first country to benefit from its training programmes.

He urged the trainees to utilise the knowledge they have acquired from the training to impart positively on the nation’s aviation security system and ensure safe and secure aviation sector.

According to him, the government is committed to the project in terms of funding and facilities required, in making the nation’s aviation security more efficient.

Sirika also disclosed that a good number of AVSEC personnel were currently undergoing training on the use of arms and ammunition.

Some of the beneficiaries, who spoke with the News Agency of Nigeria (NAN), expressed appreciation to the government and the UN for the training.

Mahroof Adekilekun, said the training was an eye opener to them, adding that he was able to acquire new skills in combating security threats in aviation.

Adekilekun pledged to use the knowledge acquired to contribute to positive change in the nation’s aviation security and ensure safety of infrastructure.

Another trainee, Mrs Sarah Alex, said she was impressed with the level training by the UN, while also pledging to make use of the training for enhanced service delivery.

The trained personnel are expected to train other personnel at the two training centres to be set up by the UN in Lagos and Zaria. (NAN)