We are gathered here to celebrate a life of service and sacrifice. We are here to honour an officer and a gentleman who gave his all to Nigeria, to his people and to his race. 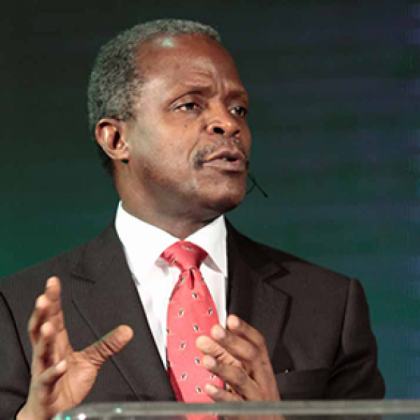 He was the President’s first indigenous Chief of Army Staff, and in these military roles, he had a major influence on the President as a young officer. It was therefore not a surprise that the President specifically asked me to represent him on this occasion, not being able to attend this funeral personally and further asked me to deliver the funeral oration here.

What shall be said of us when we are no  longer here?

In General Adebayo’s case, his departure has elicited tremendous outpouring of love and nostalgia across the country. For General Adebayo, the reactions since the Lord called him on March 8, 2017 have all been positive.

As one of the pioneers of Nigeria’s most enduring institutions, the military, General Adebayo played a critical role in rescuing Nigeria from the abyss of disintegration. Not only did he advice against the use of force in resolving the Biafran crisis, in what turned out to be one of the most clairvoyant statements on the war, he declared in a broadcast before the war thus, “I need not tell you what horror, what devastation, and what extreme human suffering will attend the use of force. When it is all over, and the smoke and dust have lifted, and the dead are buried, we shall find, as other people have found, that it has all been futile, entirely futile, in solving the problems we set out to solve.”

But General Adebayo was no peacenik. When the situation demanded as Governor of the West, he worked hard alongside others to protect the region from the onslaught of the rebel army by halting the advance into Lagos in Ore. Immediately the civil war ended though, he was readily at hand to play the role of the post-war conciliator, as the officer requested by General Yakubu Gowon to chair the Committee on the reconciliation and integration of the Ibos back into Nigeria.  By most accounts, he handled the task admirably.

General Adebayo’s life was a light-bearing one. Though kindled in the ancient town of Iyin, in Ekiti State, Nigeria, his light shone brightly for the world to see. In an obituary in The Times of London on April 18, 2017, he was described as the “Governor of the Western Region of Nigeria whose attempts to promote peace and prevent the Biafran war failed, with devastating consequences”.

Whatever may be said of what eventually spiraled into the civil war, General Adebayo’s pioneering role in the quest for peace did not go unnoticed.  In fact, this became his most significant imprimatur all through his life. As the oldest living Nigerian military officer at the time of his death (NA7), his rise through the military was as meteoric as it was admirable.

From serving as the Aide-de-Camp to the last colonial Governor-General James Robertson, from 1957 – 58, he chalked up a string of firsts:

*first Nigerian army officer to attend the Imperial Defence College, where he was during the 1966 coups,

Indeed, his military trajectory in a way was a study in Nigeria’s history.

Even in retirement, he remained passionately committed to the unity of Nigeria. His life of meritorious service to God and country is a testament of faithfulness, diligence, humility and integrity. His impact has clearly reverberated beyond the confines of his first love – the military and across all spheres of life.

Many remembered his role during the dark years of military rule as one leader who supported the struggle in various ways, unafraid to speak truth to power with his house serving as the foundational headquarters for NADECO – the National Democratic Coalition.

It was a fitting recognition of his steadfastness that his first son, Adeniyi, was elected as the first civilian Governor of his native Ekiti State.

In the last years of his glorious life, though General Adebayo remained an unapologetic nationalist, he challenged the leadership of the South West of Nigeria, to relive and revive the glories of the Old Western Region. As he said, “Awolowo earned the respect of the people by leaving an enduring legacy that defined the Yoruba heritage, the Yoruba political elite is now compelled to do better.” He  was particularly concerned that the West had fallen behind in education, in Agriculture and in the provision of social services and urged that a renaissance of the Western Region was called for and immediately necessary.

The good General is gone. But as scripture says a good man leaves an inheritance for his children’s children. That inheritance is not money or property, it is a legacy of character, of patriotism, love of country, and service to the people. We thank the Lord for the life and times of this good man.

It behoves those of us that remain on this side of eternity, as we gather to celebrate this great man of honour to reflect and rekindle our lives with the light from the life of the General – that the dark aspects of our nationhood might be illuminated by his unyielding search for peace and justice in our land.

We can never thank the late General enough for his service and sacrifice to the nation. But we must also not take for granted the labour of this redoubtable hero. Indeed, we owe him a duty to continue to pursue the values which his iconic life represented.  It is for this reason that the Federal Government of Nigeria has decided in recognition of his service to Nigeria to name the Federal University in Oye-Ekiti–The Adeyinka Adebayo Federal University.

On behalf of the Government and the people of Nigeria, I offer heartfelt condolences to the Adebayo family, to the  people of Ekiti State, to the Nigerian Armed Forces, and all those who hold him dear. We shall all miss him greatly.