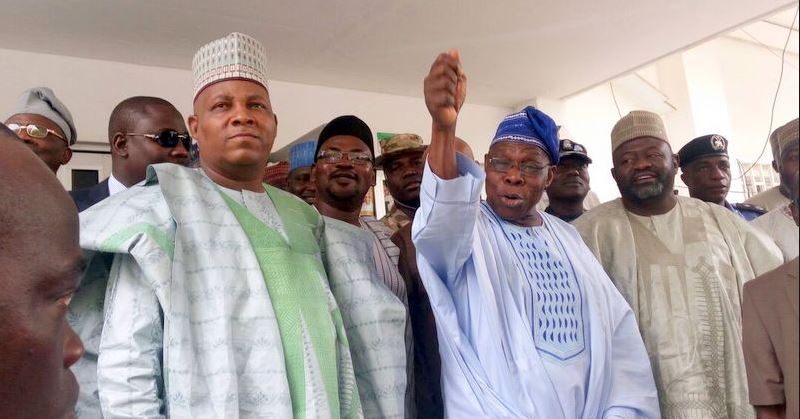 Remarks By Gov. Shettima On Visits and Presentation of Seeds By Obasanjo

President Obasanjo has been consistent in standing for the unity and indivisibility of Nigeria. As a soldier, he fought to preserve Nigeria’s Unity.

President Obasanjo has been consistent in taking firm positions and making his positions known at very critical times when other leaders would prefer silence. His words and actions have often given Nigeria and Africa a sense of direction. He has been consistent as Head of State, as President and as Africa’s statesman.

President Obasanjo has been consistent in promoting Agriculture in Nigeria and the rest of Africa. As Head of State between 1976 and 1979, it was Obasanjo who approved the funding of a major research carried out by the International Institute of Tropical Agriculture on hybrid maize. By the time Obasanjo approved funding for that research, he knew the outcome was coming in the 1980’s, after his tenure as Head of State. He knew he was not going to directly enjoy the political glory but yet he approved the funding and as it happened, that research by the IITA was at that time a major breakthrough for farmers in maize cultivation. Farmers who harvested less than one tonne of maize per hectare ended up harvesting as much as three tonnes per hectare because the IITA research funded by Obasanjo gave birth to hybrid seeds.

Farmers in Nigeria and all over Africa largely benefited from those hybrid seeds in 1983 when I was just completing Secondary School. 34 years after,President Obasanjo is here and still involved in promoting the distribution of seeds of farmers. I am privileged to have witnessed today’s presentation and I pray that God will keep President Obasanjo for us in good health, strength and sustained wisdom so that future leaders would have the privilege of directly benefiting from one of Africa’s finest, consistent and courageous leaders.

Obasanjo’s love for Agriculture is one that looks Divine. Some would argue that the Obasanjo Farms is also a major profit maker. But then, as Head of State and as President who presided over Nigeria’s oil wealth and structure, he could have approved oil blocks and licence for himself to go into the far more fortune seeking business of oil export. If he liked, his successors could have allocated oil blocks to him. A single major deal in the oil sector canrake-in what the Obasanjo farms would toil to generate in an entire year or more. Rather than majors like oil, banking, aviation, etcetera, Obasanjo chose to be more concerned about helping to put food on the tables ofNigerians. Farming is just like Medicine, it involves not just the thought ofprofitable business but also the thought of contributing to humanity. In the United States, there was a time farmers had to go on protest because single ladies didn’t want to get married to farmers.

I consider any productive farmer a humanitarian, no matter what he or she makes. This is essentially why the International Institute of Tropical Agriculture will forever remain of one the greatest holder of the world. This is an organization whose only concern is to deploy so much resources into identifying ways by which food can be grown in higher quality and quantity to feed the world, to make the farmer grow in productivity in order to create more jobs. Agriculture remains the highest employer on earth and the IITA plays a pivotal role in sustaining this.

Words cannot adequately convey the depth of our gratitude to the IITA and to President Obasanjo who is an Ambassador of the IITA, for the choice of Borno as beneficiary of a remarkable intervention.

Seeds, particularly at this time, is life saving for us in Borno State. In a typical conflict situation, majority of farmers end up eating up their seeds because they can’t plant them. These seeds will be of immediate use to our farmers in the Southern part of Borno State which has been less affected by the Boko Haram insurgency. Farmers there are still carrying out their activities as against areas like Northern Borno. We are currently trying to acquire fertilizers for our farmers in Southern Borno and we know that in that part of Borno State, fertilizer and seeds are far more important to them than anything from Government.

We are repositioning the Agricultural sector like my brother, the Honourable Commissioner for Agriculture highlighted, and we believe that with the support we are getting from institutions like President Obasanjo and the IITA, we are in a good position towards the economic recovery of Borno State for livelihoods, for wealth creation and to contribute to National food security.

Once again, we receive these seeds and other interventions with deepest appreciation and prayers that God in His infinite bounties, reward the IITA and President Obasanjo with His grace and mercy.

Thank you so much.