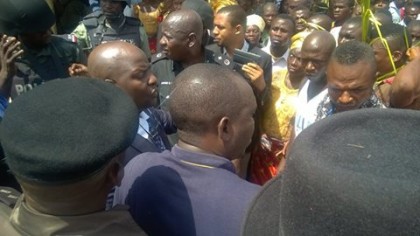 The South-South Zonal Head of the Economic and Financial Crimes Commission, EFCC, Mr. Ishaq Salihu on Monday, appealed to scores of protesters that swarmed the Port Harcourt Office of the Commission, not to take laws into their hands and allow justice to take its course in the investigation and imminent prosecution of Mr. George Turnah, a former Special Adviser to erstwhile managing director of the Niger Delta Development Commission, Dan Abia.

The protesters, mostly youths, under the aegis of ” Egbeyin Congress and Ogbia Brotherhood Council” and led by one Comrade Dan Igbe, said that they were protesting in support of Turnah, who they alleged “was being humiliated by the EFCC”. According to Igbe, “we will not allow George Turnah to be killed like the former CSO to former President Goodluck Jonathan” He also said his group “will never again allow its leaders to be humiliated by the EFCC”, stressing that “the EFCC’s investigation is one-sided because it is only investigating Niger Delta leaders “.

The Ogbia Brotherhood Council, headed by Comrade Mr. Nathaniel M. Goodnews stated that Turnah was their hope and that the EFCC should “let George Turnah go”.

In his response, Salihu said that the EFCC was a law-abiding agency and impartial in its investigation. “There is nothing political about the case of George Turnah or any other case we are doing here. We cannot be stampeded, rushed, intimidated to arrive at an unjust course. Justice should be allowed to run its course. We will continue to do our job without fear or favour, affection or ill will and the Commission will not leave any stone unturned in doing its job”, he said.