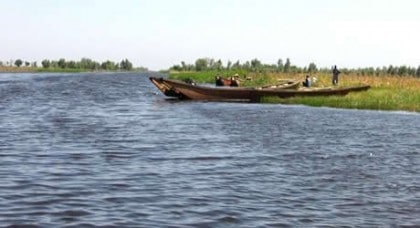 The federal government says it will do everything possible to ensure the recharge of the Lake Chad which has dried up to 90% minister of interior, Lieutenant General Abdulrahman Dambazau stated this in Abuja when received a 16 man delegation from the Indian National Defence College, New Delhi India. Keji busari-ahmad reports that the minister stated that the Lake Chad accounts for the livelihood of over thirty million people in the region

With representatives from about 38 African countries and over 250 delegates, the 2017 African Digital TV Development Seminar has started in Beijing to discuss ways of facilitating digitization in Africa.

Minister of Information Lai Mohammed who led the Nigerian delegation called on African ministers to find areas of advantage in their respective countries and leverage on them to develop African digital economy.

Nigeria is a fertile ground where inventors are trained and made to attain a greater height.

This is evident at the international community school in Abuja where students from different cultural background, belief and religion displayed their ingenuity in arts.

The Federal Government has begun an in-house dialogue with permanent secretaries and chief executive officers of agencies on the effective implementation of the economic recovery and growth plan ERGP.

Opening the session, Minister of Budget and National Planning Udoma Udo Udoma says the dialogue will avail government the opportunity to glean recommendations and suggestions from the public sector to fashion out the best approach to implementing the plan.

The Damare IDP camp which was taken over from the NYSC to temporarily to accommodate those affected by insurgency attacks in Adamawa State has been formally closed down and handed over to the NYSC.

Reports say that the camp which hosted over 6,000 IDP’s for over four years is now set to host the 2017 batch “a” corps members posted to the state for their orientation.

Emire Muhammadu Sanusi ii has attributed the collapse of many industries in Kano to trade liberalization and influx of manufactured foreign goods.

In a key note paper at a one day conference to commemorate fifty years of Kano’s statehood, the emir advocated more attention to agriculture and industrialization.

For about 3 years, parents and relatives of about 300 abducted female students from a government secondary school in the remote town of Chibok North East Nigeria were in pain and agony following uncertainty on the where about of their daughters and wards as an adage says a dead child is better than a missing one.

Investigation shows that some did not live to see the release of their daughters, consequently parents of the rescued 82 girls could not hide their joy as they set their eyes on their children.

The House of Representatives Committee on Federal character has expressed the Determination to unveil the truth on the Allegations of irregularities on the recent recruitment exercise by the National Agency for Food, Drug Administration and Control NAFDAC. This declaration came up when the house Committee visited the agency on oversightFunction.

The Federal Government’s determination to reposition the maritime sub-sectors of the economy for it to stand the test of time is on top gear at the legislature is re-invigorating its deliberation on the eight bills before it.

At a public hearing by the house, the viability of bills towards attaining

The maritime domain within the gulf of