3 Suicide Bombers Killed In Another Foiled Attack In Borno 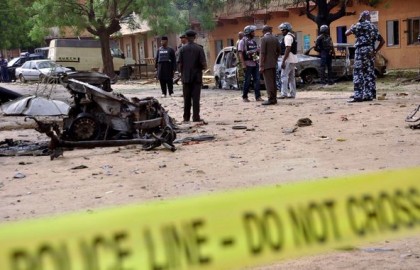 Another Suicide Bombers Killed In Maiduguri

The Police in Borno on Wednesday confirmed the killing of three suspected female suicide bombers after a failed attack near Maiduguri.
Mr Victor Isuku, the spokesman for the command made the confirmation in a statement in Maiduguri.

“Today at about 17.55hours, three female suicide bombers, suspected to have been conveyed by motorcycle and dropped at a distance to Mamanti village in Molai area, were sighted and intercepted by vigilant security operatives.
“In the process, they hurriedly detonated explosives strapped to their bodies, killing themselves only’’, Isuku said.

He said that a team from the Police Explosive Ordinance Department was promptly drafted to the scene to sanitise the area and restore normalcy, adding there was no civilian casualty.

The News Agency of Nigeria (NAN), reports that the police had confirmed the killing of three suspected suicide bombers after a foiled attack at the University of Maiduguri on May 19.

NAN also reports that  police on May 20 confirmed the killing of a suspected  suicide bomber after a failed attempt to carry out an attack at the University of Maiduguri on Saturday. (NAN)