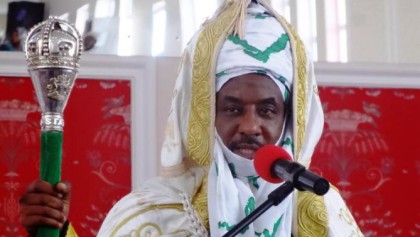 The Kano State House of Assembly has withdrawn the investigation of the eight count charges labelled against the Emir of Kano Muhammadu Sanusi II. This followed a letter of plea to stop the investigation by the state governor Abdullahi Umar Ganduje to the legislature at Monday’s Plenary.

African Digital Villages Project
The Nigerian team at the 7th Africa Digital TV Development Seminar led by Minister of Information and Culture Lai Mohammed is doing all to ensure Nigeria gets as much as she can from the Chinese government’s implementation of its ten great co-operation plan for Africa, particularly in the planned digitization of ten thousand African villages

Acting President Yemi Osinbajo has received the news of the death of Chukwuma Onuekwusi, Channels TV State House Correspondent with great sadness. In a release by the senior Special Assistant to the President on Media and Publicity in the office of the Vice President Laolu Akande, the acting president extends heartfelt condolences to his family, as well as the Channels TV family on the very sad passing of Onuekwusi

Chief Justice of Nigeria, Justice Walter Onnoghen has commended courts that have introduced the e-filing system as part of their court processes.

He gave the commendation in a message to the national workshop for information technology staff of the nation’s judiciary.

The three tiers of government have shared the sum of 415.73 billion naira being revenue accrued for the country in the month of April.

The figure is less than what was realized in the month of March which led to a proposal to distribute 20.425 billion naira from the excess petroleum profit tax account and 38.517 billion naira exchange gain to shore up the short fall.

Briefing the media on behalf of the Finance Minister, Ahmed Idris, accountant general of the federation attributed the fall to a chain reaction of activities affecting oil production.

He said efforts are on to permanently stem sabotage in the oil producing areas.

Nigeria has joined the “he for she” global campaign with a call to mobilize millions across the country to commit to join the movement.

Key players say with Nigeria on board as the most populous country in Africa, the global campaign to bring the needed changes in bridging gender gaps will be fast tracked

Efforts at strengthening diplomatic relations between Nigeria and Ethiopia have remained top priority of the two countries.

The Minister of Power, Works and Housing, Babatunde Fashola says the Buhari Administration is sustaining policies that will continue to create jobs and opportunities for the people through the power sector plans by the government.

Reports say that the minister stated this at the inauguration of a solar power generation facility in Abuja.

State governments have been urged to key into the economic recovery and growth plan of the federal government to ensure inclusive growth in the nation’s economy.

Minister of Budget and National Planning Udoma Udo Udoma was speaking at the 2nd edition of Kano State economic and investment summit 2017.

The Nigeria Union of Pensioners has appealed to the Federal Government to investigate alleged cases of financial misappropriation in its electricity sector so as to save members from another round of financial hardship.

The appeal was made in Abuja during the inauguration of a caretaker committee with terms of reference including interfacing with government agencies responsible for pension payment.

Mrs Buhari Condoles with the Family of Waziri of Adamawa

The wife of the President Aisha Muhammadu Buhari has condoled with the family of Lamdo Malabo over the death of Muhammad Ahmad Maigari Malabo who died recently in Yola the Adamawa State capital.
State house correspondent Aliyu Kabir reports that the wife of the president described the death of Ahmad Maigari as a loss not only to the family but to the entire people of Adamawa, until his death Maigari Ahmad was an uncle to the wife of the president. She prayed to god to grant him eternal rest.

A total of 1000 former agitators under the presidential amnesty programme are being deployed for training at the international institute of tourism and hospitality in Yenogoa, Bayelsa State.

The training is projected to explore the diverse business opportunities inherent in the rich cultural heritage of African societies while particularly emphasizing the peculiarity of the Niger Delta eco-system for tourism.