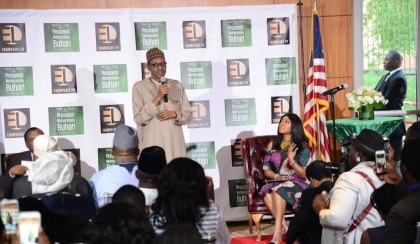 The house committee on health institutions Has reiterated the commitment of the National assembly towards enacting laws That will harmonies various agencies in the health sector for improved healthcare. It was at a public hearing organized by the committee to have inputs by relevant agencies on some health bills. Also Read;News Summary; 24/05/2017 Kano Assembly Discontinue Sanusi’s Probe

Acting President Yemi Osinbajo, has felicitated with former Federal Commissioner of Information and elder statesman, Chief Edwin Clark on his 90th birthday. In a release by senior Special Assistant to the President in the office of the Vice President, Laolu Akande, stated that the acting president joins family members, friends, colleagues and the entire Ijaw nation in commemorating the milestone in the life of the nationalist, whose life reflects the collective and continuous efforts towards building a great nation.

As a demonstration of the commitment and determination to improving Nigeria’s business environment for local and foreign businesses, Acting President Yemi Osinbajo has held an interactive session with members of the federal civil and public service considered as implementers of the executive orders.

Administrators of customs across African continent have been challenged to employ simplified interventions that would ease movement of trade and goods across national borders to enhance trade facilitation.

Minister of Finance, Kemi Adeosun gave the challenge at the first extra-ordinary meeting of the African Union sub-committee of directors general of customs holding in Abuja.

State governors elected under the all progressive congress APC converged on Abuja at a meeting with national working committee of the party during which their performances in the past two years came under scrutiny. At the end of the national working committee applauded the performances of the governors in line with the agenda of the present administration.

Chief of Air Staff in Kaduna

The air chief stated this at the second quarter meeting with branch chiefs, AOC’s and unit commanders across the country at air force base, mango Kaduna.

Though seen as a technological intensive process, requiring huge capital investment, experts and African representatives at the 7th African Digital TV Development seminar have reaffirmed that digitalization is a necessary social project that will positively affect how people receive and share information while also enjoying quality entertainment.

The Federal Executive Council has approved the setting up of a 29 man committee that will come up with realistic and sustainable national minimum wage for workers in the country.

Minister of Labour and employment, Chris Ngige who announced this after the council meeting said decisions have also been taken on palliative measures as well as outstanding salary arrears and other benefits owed civil servants.

This follows their being found liable for professional misconduct.

House on Bills for Federal Projects in States

A bill for an act to provide a legal framework For the regulation and execution of federal government projects by states has been passed for second reading in the House of Representatives. Reports say that the bill among other issues to ensure due process and transparency in the project process.

As terrorists attacks continue to be a source of concern to global peace and security, the Nigeria police is stepping up strategies in counter terrorism investigation.

This is part of the Inspector General of Police, Ibrahim Idris message delivered at a police leadership seminar on counter terrorism training development in Abuja.

The Kano Economic and Investment Summit have ended with the signing of memoranda of understanding for the generation of three hundred megawatts of electricity by three foreign investors.
Also, seven other investors have agreed to invest more than three billion dollars in the provision of critical infrastructure in the state.