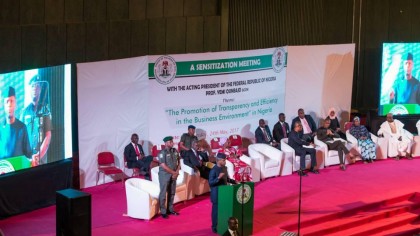 Acting President Yemi Osinbajo, SAN, has stressed the need for hard work in the civil service in order for Nigeria to actualize its developmental aspirations, noting that, “no matter how much you pray or fast our country cannot grow without doing the hard work that makes nations work.’’

Below is the full text of the Acting President’s address:

ADDRESS BY HIS EXCELLENCY, ACTING PRESIDENT YEMI OSINBAJO, SAN, GCON, AT AN INTERACTIVE SESSION WITH MIDDLE-LEVEL CIVIL SERVANTS ON THE  RECENTLY SIGNED EXECUTIVE ORDERS AT THE INTERNATIONAL CONFERENCE CENTRE, ABUJA ON MAY 24, 2017

I noticed that the only time when there was spontaneous applause was when someone spoke about salaries and emoluments! (general laughter)

Let me assure you that you are in good hands; both the President and myself are civil servants; the President has said repeatedly that he has had no other business but working for the government of Nigeria. He has been a salary earner all his life, so he understands what it is when your salaries are delayed or you have problems with salaries or emoluments that are owed.

But there are some people in every generation who have a special burden, a more important role than others in preparing for present prosperity and future abundance and this group of people are called public servants.

You and I who are here today; we are that group of people who have the special burden of providing and preparing for the future.

As I said earlier, I have served in the public service most of my adult life; as a university teacher, as an adviser to a Federal Minister, as Attorney General for about 8 years. I earned a salary, so I understand how salary increases can be such good news.

But most importantly, I learnt of the power of the public service to change the social, economic and political story of a nation. As a university teacher I realized the difference between teaching students with a vision and producing the best quality, and just doing your job. I saw how some of the least motivated students became great advocates, great lawyers, great law teachers, because the teacher gave them what was in their hearts, gave them all of their hearts and did their jobs as civil servants.

I believe that if we civil servants chose to do what we are called to do, our country will change.

Last week I was speaking to Permanent Secretaries and heads of parastatals on this same topic. We looked at the issue of unemployment. The most important investment we can make in life is probably in the education of our children.

We put in all we have, sometimes we even put together enough to send them to universities abroad, some even to secondary schools abroad; then they graduate and can’t find jobs. There is nothing more heartbreaking than seeing your son or daughter after graduation and Youth Corps Service not having anything to do.

In the past few years, I have tried to study the problem closely. How do we create jobs? How do we have enough opportunities for the millions of young people now and tomorrow?

Clearly government jobs are limited and there is no room creating more. Already we are spending over 70% of our revenue on salaries and overheads, so there is very little room for creating more jobs in the public service.

The power house of the economy; the fastest and most efficient job creators are private businesses, both small and large; investments, both local and foreign.

Everyone who starts a business, invests in an existing business or expands a going concern, creates opportunities for jobs, jobs mean money in people’s pockets. It means that whole families can survive, live well and pay taxes, so that government can continue to provide services, build schools, hospitals, roads and other infrastructure.

But small or large businesses cannot be created or can be frustrated out of existence if the environment for doing business in a country is harsh or difficult. It is the public service that determines whether the business environment will be friendly and welcoming for business or whether business will be driven away or destroyed. Or whether the opportunities to create jobs will be there or not.

When I say public service, I don’t mean (only) public servants in the executive arm such as those who are here today, I mean also in the judiciary and the legislature.

Let me give you an example that I shared with the Heads of Parastatals and Permanent Secretaries last week. To see how delays in the court procedures can kill business, I was talking about something that we did while I served in the government of Lagos State.

Why was this happening? One of the major reasons was that when you build a house and rent it out, you expect that there would be an income stream from it coming year after year. But what would usually happen is that the tenant pays for two years advance and thereafter doesn’t pay anymore. He expects you to go to court, like go to a Magistrate court and he keeps you there for as many years as the Magistrate court delays.

So the delay in the court system means that you will not earn your rent and that other people and you will be discouraged from building. So until you can get that tenant out of your house so you can bring in other tenants, you are in trouble.

So, we understand that the problem of delays in the court system will eventually impact the building of houses, impact that sector which means there would be fewer jobs.

Everything that happens in public service that delays always affects jobs.

So, when a potential business owner wants to register a company, collect tax clearance certificate or obtain NAFDAC registration or S.O.N certification, or expatriate quotas, or any other papers, approvals or certification from government, and we do not willingly and efficiently help him or her, we are killing the jobs and prosperity that he would have created.

So every time that a public officer is an obstacle to business in any way he attacks the prosperity of our economy and he attacks our future, it means our children cannot find jobs.

Great economies and great nations, prosperity and abundance of nations and communities are created by men and not spirits and I want to emphasise this point that those who make nations great are you and I, not spirits.

No matter how much you pray or fast our country cannot grow without some of us deciding to do the hard work that makes nations work.

I am sure that most people know and are aware that I am a pastor, a spiritual person, and I understand the law of sowing and reaping. It is a spiritual law that has tremendous physical implications.

Every time that we delay, or frustrate what we can do today leaving it till tomorrow, we hold back the future, we too must reap what we have sown by experiencing delays. If you help others to achieve, if you help your nation you have sown good seeds you will find help and you will prosper too.

So don’t see this (just) as government policy. This for us must be personal policy. We must determine that the future of our country depend on our personal investment in what we ought to do.

In the third Executive Order, we address an issue which the president, President Muhammadu Buhari has described as a cornerstone of our economic policy – the “Buy and Use Nigeria Policy.” The President said at the launch of the Economic Recovery and Growth Plan that we must grow what we eat and make what we use.

Just to give an example, we eat a lot of rice in Nigeria but we import most of it. Yet we can grow enough rice to serve the whole Africa just from one region of Nigeria.

Assuming that only the northern states are producing rice today, produced at maximum capacity, we can feed the whole of Africa, not just ourselves. So we decided to start a self-sufficiency programme in rice production, but local rice is still expensive, more expensive than the imported one.

The reason why local rice is still more expensive than imported one is because those who are importing are doing something smart; from Thailand, from India, from Vietnam, wherever rice is being imported from, those countries are subsidizing their farmers so that rice can be cheap. And when they export to Nigeria they can be at an advantage over Nigerian rice. Why do they subsidize rice farming? (Just) so that they can create jobs for themselves.

Whenever we buy imported rice, we are creating jobs for people in those countries where the rice is imported from but if we insist on buying local rice we are creating jobs for ourselves; so it is our own business as government to introduce those kinds of incentives for our people by subsidizing production, by subsidizing even farm-market of rice so that our rice can be competitive.

But this begins from being more expensive but I can assure you that in the coming months, our rice will compete with the ones from anywhere in the world.

Those who have made their rice cheap didn’t fall from heaven, they are human beings like us.

So we are also sitting down and looking at all of the strategies that would make food cheaper, that would make it cheaper and easier and cheaper for Nigerians to be able to afford what it is that they will want to eat.

In conclusion, the prosperity and happiness of our nation depends on us, we public servants. Our civil service is the best educated and largest in Africa. We have the capacity, and the vision is clear. I want to urge us to go forward together as public servants to prove that an African nation can be better, bigger and greater than any nation in the world.