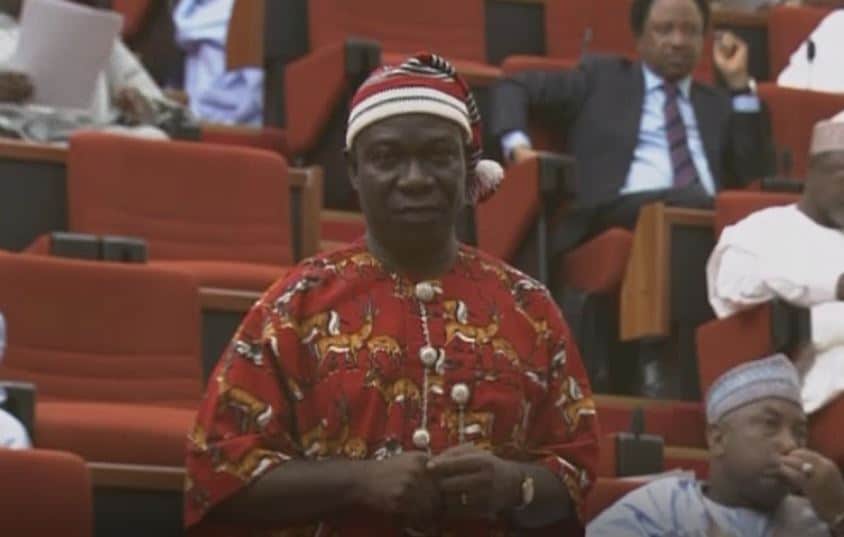 Uche Anichukwu, Abuja: The Deputy President of the Senate, Senator Ike Ekweremadu, has urged Ndigbo not to allow themselves to be provoked into any armed struggle, but to continue to sustain peaceful agitation for equity and justice within the Nigerian commonwealth.

This was even as he explained that the Eastern Rail Line was not to the benefit of the South East alone, but also the South South, North Central and North East.

Ekweremadu spoke at the World Igbo Congress (WIC) summit in Enugu on Saturday.

He said: “The minimum Ndigbo demand of Nigeria is a restructure of the federation so that every component part of it can substantially harness its resources, cut its coat according to its cloth, and develop at its own speed.

“Instructively, the ill-fated Aburi Accord was about restructuring, even if it is not exactly as we want it today. But it was breached and discarded, plunging the nation into an avoidable fratricidal war. Yet, fifty years after, the need and call for restructuring and return to a true federal state have only persisted.

“Although the call initially fell on deaf ears, it is heartwarming that the right quarters are beginning to listen and the call is gathering traction daily, even from hitherto improbable quarters”.

He commended Ndigbo for eschewing violent in their struggle for a better deal within the Nigerian commonwealth.

“No matter the intimidation, harassment, and marginalisation of our people, we must never be provoked into an armed struggle. It is an ill wind that blows no one any good.

“But we must consistently continue to say a loud, ‘No! No! No! No! No! No! No! No!, until we get to the promised land of an equitable and just society. Let no man be tired and let no woman give up. The night may be long, but the day will surely break.

He urged the Federal Government to seek and sustain peace in all parts of the country through equity, justice, and fairness as “a man that is unjustly treated will never be interested in peace”.

“Importantly, the marginalisation meted out to Ndigbo in appointments, especially in the commanding heights of the security sector is unacceptable; and must be redressed”.

He assured that the National Assembly would continue to uphold the rights of Ndigbo, and indeed every part of the nation, to fairness and equity.

He explained: “The Senate is currently engaging the executive arm of government on the railway development and modernization projects, which has totally excluded the Eastern Rail Line or Eastern Corridor, traversing major towns and cities like Port Harcourt, Aba, Enugu, Otupko, Igumale, Makurdi, Kafanchan, Kuru, Bauchi, Gombe and all the way to Maiduguri.

“Contrary to the attempts to misrepresent the coverage of the Eastern Rail Line to the public, this corridor is not just for the South East, but also covers the South South, North Central, and North East.

“Curiously, all the loans for railway projects by the current administration, totally excluded this vital corridor to the advantage of the Western Rail Line, running from Lagos to Kano.

“But, the questions are: Why will loans taken on behalf of Nigerians and to be repaid by all Nigerians exclude more than a half of the country from the benefits of such loans? Why should the South East, South South, North Central, and North East pay for what they were inexplicably excluded from enjoying? Why must the Eastern Line be relegated to concession arrangement, to be paid for by our people as they use the facilities? What is the likelihood of even getting a concessioner, especially given the history of concessions in the country?”