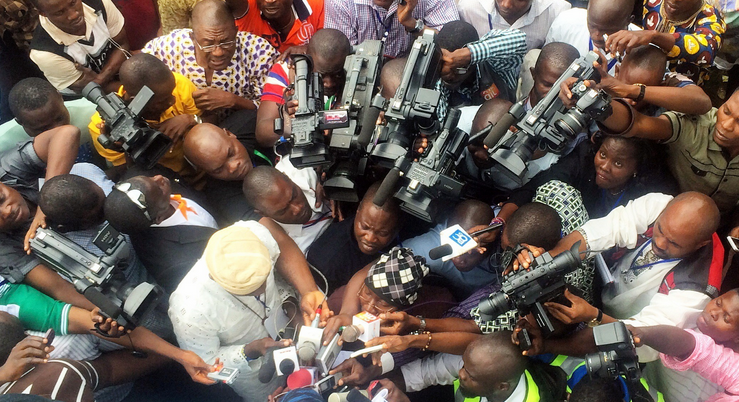 The Minister of Youth and Sports, Mr Solomon Dalung has commended the efforts of Nigerian Journalists toward entrenching genuine democratic culture in the country.

The minister made his position known when he visited members of the State House Press Corps to condole with them over the death of one of their members, Chukwuma Onuebgusi, on Tuesday in Abuja.

Dalung lamented that the Nigeria had not been fair to Journalists in terms of welfare and other necessities of life, saying that journalists were forced to engage in what he described as “wheel-barrow journalism’’.

“Looking at the role journalists play even in entrenching this democracy, I don’t think and believe that they had actually been accommodated within the structure with which they sought to build.

“I believe that the absence of journalists in the present democratic experiment is also one of the major factors with which we have not appreciated them much.

“Anybody who participated in the struggle for democracy in this country would know the role journalists played. Many lost their lives in the struggle, but unfortunately, when democracy finally came what has actually become of journalism is the Wheel-Barrow Theory.

“The wheel-barrow is a very important tool that has no garage, it is kept in the sun and under the rain but when there is the need for you to convey any bag of either garri or rice, you rush, you dust it and use it and return it to where you kept it.

“It is unfortunate, we need to begin to appreciate contributions in this country before we will take our bearing properly, our reward system is fundamentally faulty.’’

According to him, what is left of journalism is to build a profile of enmity in a country where people do not appreciate being truthful.

He said: “at the end of the day when you phase out as Chukwuma has done, we are only now left with storytelling.

“The state chapel here and the Nigerian Union of Journalists will now be left as the final constituency to be responsible for him, his family and his little kids and how far can they go.

“So, I am of the opinion that we must look at our laws and entrench a very solid reward system to guarantee contributions of key actors like journalists.’’

The minister, who announced that he just resumed after a successful medical vacation, expressed sadness over the sudden exit of Onuebgusi, whom he described as “a very great and gentleman, a friend, somebody who personally I appreciated so much’’.

“The news came to me as a devastating blow because he never exhibited signs or symptoms of sickness. So I couldn’t comprehend actually what could have been the circumstances that led to his demise.

“I was even imagining it could have been an accident. But indeed, it wasn’t. It is a great loss not only to the State House Chapel but to Nigeria in general.

“We have lost a rare gem and I believe that the vacuum his exit created may not be occupied too easily.

“It is my sincere and honest prayers that the Lord God, the custodian of human destiny and source will grant him paradise.

“May his soul rest in perfect peace.’’

Onuekwusi, the Channels TV State House Correspondent, died on May 23, in Abuja at the age of 55.

NEWER POSTNTA News Summary: 82 Chibok Girls Handed Over To Ministry Of Women Affairs
OLDER POSTSaraki Tells IDPs ” We Will Not Forget You”