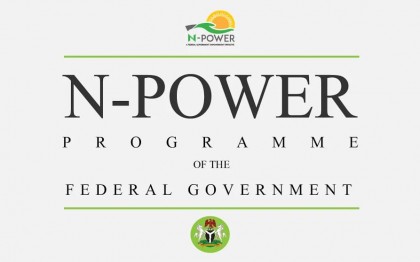 The Federal Government of Nigeria has designed the N-Power Programme to drastically reduce youth unemployment. The focus is to provide our young graduates and non-graduates with the skills, tools and livelihood to enable them advance from unemployment to employment, entrepreneurship and innovation. The first phase of N-Power will target Nigeria’s critical needs in education, agriculture, technology, creative, construction and artisanal industries. N-Power is also preparing Nigeria for a global outsourcing push where our young Nigerians can export their services to work on global projects that earn Nigeria, foreign exchange.

(NAN) N-Power is one of the components of N-SIP, aimed at empowering Nigerians both graduates and non-graduates between the ages of 18 and 35 by paying them N30, 000 monthly over a period of two years.

Some of the beneficiaries, who spoke with NAN on Wednesday in Abuja, said that the programme had established them and taken them out of poverty.

Nwanjel Alfred, a beneficiary of N-Power graduate scheme in Plateau said he was employed under the scheme and posted to a Nomadic Primary school in the state as a teacher.

“I graduated in 2011, did NYSC in 2012 and I was not employed for five years; I studied Biology Education but have passion for agriculture.

“There is no capital to start agric project but as soon as I started receiving my stipend in December 2016,  I went into farming.

“I have been able to plant and harvest 15 bags of Irish Potatoes seedlings and I thank God the potatoes are doing well.

“Hopefully in July, I should be able to harvest 50 bags from the farm,’’ he said.

The beneficiary, however, appealed to the government to ensure the sustainability of the programme by giving them full employment after the two years duration of the programme.

Similarly, a beneficiary from Taraba, Jeremiah Daniel who graduated in 2008, said he became a photographer as there was no job.

“A photographer turns a teacher, courtesy of N-power and I have been able to embark on contributory scheme from my stipend.

“We are six posted to a secondary in the state, we contribute N30,000 (all the stipend) and I have received N180,000 from the first round of contribution and I want to open a cyber café.

“I have been able to render such service in a rural community in addition to the photography,’’ he said.

Daniel said that the government had promised to also give them digital device as part of the programme to empower them technologically.

He said that the government had been paying N4,500 monthly to a company that would supply the electronic gadgets, which they promised would be ready for disbursement in June.

Daniel, however, advised youths to desist from involving in social vices and engage in business to support and make them self-reliant.

Also narrating his experience, Okoka Owa, a beneficiary of N-power in Cross River, thanked the Federal Government for coming up with such a programme.

“I want to open a food stuff shop from the money I will get from the contribution,’’ she said.

Meanwhile, Mr Afolabi Imoukhuede, Senior Special Assistant to the President on Job Creation (N-Power Scheme), said no fewer than 200,000 out of 500,000 youths targeted had been empowered under the N-power programme in the country.

The presidential aide said the N-power scheme was being implemented under the N-SIP as promised by President Muhammadu Buhari during his campaign to help poor and vulnerable Nigerians. (NAN)