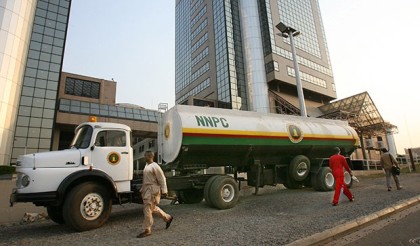 The senate has rejected the proposed marginal increase in fuel price intended to fund road repairs across the country.

Reports say that the decision followed the consideration of a report in the federal road funds bill 2017 sponsored by Senator Kabiru Gaya.

This was while observing the Ramadan Iftar with members of the Muslim community in the Federal Capital Territory Abuja.

The Nigerian Television Authority says it will continue to support the nation’s financial literacy drive.

Director General of the NTA, Yakubu Ibn Mohammed made the promise when he received a team from the Securities and Exchange Commission in his office.

The Federal Government has renewed its commitment to revamping the Afam power plant expected to address the power needs of the zone.

The Minister of Power Works and Housing Babatunde Fashola gave the assurance after inspecting the facility at Afam Rivers State.

FG not to Concession Refineries

Minister of State for Petroleum Resources Dr. Ibe Kachikwu says there are no intentions by the federal government to concession refineries but will engage reputable companies with the requisite financial and downstream capabilities to revamp them.

For the county to curtail loss of resources in the oil and gas sector, advanced technological surveillance devices must be adapted in monitoring and safeguarding the inland waterways.

This is the position of the house Adhoc Committee investigating the alleged 17 billion dollars crude oil theft in the oil and gas sector at the conclusion of a three day public hearing on the matter.

This was at one day public hearing organized by the house committee on constituency outreach.

IGP Warns on Threats/Breach of Law

The police have directed all state commissioners to be at alert to bring to order any threat or breach of law as no tribal or social group has power to stop any citizen from carrying out his legal activities in any part of the country.

The Inspector General of police Ibrahim Idris gave the warning in Abuja at a meeting with all commissioners of police and higher ranks.

Normalcy has returned to some communities on the outskirts of Maiduguri, the Borno State capital, following Wednesday evening’s coordinated attacks and bomb explosions by Boko Haram terrorists, which were repelled by the military.

Minister of Transportation Appears Before Senate Committee on Foreign Debt

The Federal Government has reassured Nigerians that no zone would be excluded from the ongoing rail projects across the country.

The Minister of Transportation Chibuike Rotimi Amaechi gave the assurance when he appeared before the senate committee on local and foreign debts.

Muslims have been challenged to extend the lessons of Ramadan in all affairs of endeavor for an ideal and a prosperous society.

Various speakers at the 2017 State House Ramadan Lecture made the challenge in Abuja under the theme the holy month of Ramadan a sober reflection for all and sundry.

Reports say that the wife of the present Aisha Muhammadu Buhari was also attendance.

The Nigerian Airforce has refuted an online media report alleging its involvement in a coup plot.

Air Commodore Olatokunbo Adesanya says it is mischievous for anyone to think that eighteen years of un-interrupted democracy can be truncated.

The 2017 hajj fare has attracted interest of the national assembly, with senate committee on foreign affairs mandated to hold public hearing with National Hajj Commission of Nigeria and tour operators involved in the hajj.

The House of Representatives has passed a bill for second reading a bill for an act to establish the Nigerian Institute of Agriculturist.

The bill also seeks to provide for the regulation of the profession of agriculture for efficiency.

The Code of Conduct Tribunal has reserved ruling on the no case submission filed by the Senate President Abubakar Bukola saraki in his trial over alleged false declaration of assets after completing argument on the submission.