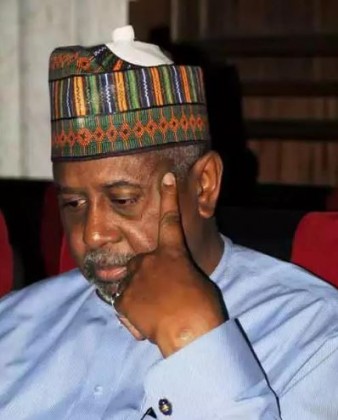 Dasuki is being prosecuted on a seven-count charge bordering on theft of Federal Government’s sophisticated weapons, illegal possession of firearms and money laundering.

Ruling on the federal government’s application, Justice Ahmed Mohammed, said the witnesses would be shielded from the press and the general public .

The judge, however, said that such witnesses  would be visible to him, (the judge), the defendant, the prosecution as well as members of  the defence teams.

According to the Judge, the application was in order since Section 232 (4) of the Administration of Criminal Justice Act 2015 allowed the prosecution to protect its witnesses in cases involving economic and financial crimes.

“Section 232 (4) of the Administration of Criminal Justice Act permits the use of a screen in a charge of economic and financial crimes; and money laundering is part of the charges instituted against the defendant.

“Therefore, the request is in order, especially when it has not been shown that it will prejudice against the defendant.”  Mohammed declared.

The judge therefore  dismissed the objection by Dasuki’s lead counsel, Mr Ahmed Raji (SAN), who had  argued that the application constituted an abuse of court process.

Raji based his argument on the grounds that a similar application filed by the prosecution in the same case had been dismissed by the former trial judge, Justice Adeniyi Ademola.

The prosecuting counsel, Oladipo Okpeseyi, had on May 11 filed an application praying the court to order that witnesses in the matter be protected.

The same application has been argued before Justice Ademola but he did not deliver a ruling before the matter was transferred to another court.

He said the witnesses were security operatives who carried out covert operations with the defendant as their boss and urged the court to allow the witnesses give evidence behind a shield.

The prosecution stressed that Section 232 (1) of ACJA permitted the witnesses to be  so shielded or masked.

He added that shielding the witnesses would not prevent the defence from cross examining them as they would be visible to the defence.