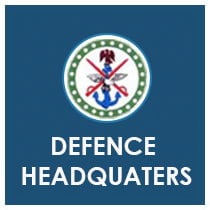 Defence Headquarters brief the media on three incidents of public interest concerning members of the Armed Forces of Nigeria.

These incidents were erroneous airstrike of Internally Displaced Persons (IDP) near the Camp at Rann in Kala-Balge Local Government Area, Borno State, on 17 January 2017, by the Nigerian Air Force, armed clash between some Nigerian Army and Police personnel in Damaturu, Yobe State, on 11 April 2017 and clash between Nigerian Navy and Police personnel in Calabar, on 30 May 2017.

Defence Headquarters constituted Boards of Inquiry to investigate the incidents and come up with their reports.

However, some of the Services and commands who were directly affected also constituted their Boards of Inquiry in line with service regulations.

In all, Defence Headquarters was equally provided with the reports of all the other Boards constituted, to investigate the various incidents.

Going by the ethics and best military practices, all the reports were harnessed by a final Board at the Defence Headquarters, to have a clear picture of the incidents.

Thereafter, comprehensive reports of each of the incidents were produced. Each covered the cause of incidents and recommendations among others.

The report show that the bombing of Internally Displaced Persons (IDP) near the Camp in Rann, on 17 January 2017 was “lack of appropriate marking of the area, near the Camp where the IDPs were struck. Hitherto, people were not expected to amass at that location,.”

Furthermore, the location was not reflected in the operational map as a humanitarian base. The normal pattern for Boko Haram Terrorists to form up, before attacking innocent civilians and troops is to amass. Hence, it appeared as a place that could equally be used for enemy activities.

Thus, when mass movement was noticed through aerial satellite observation, it was taken for Boko Haram Terrorists activity, which needed to be neutralized with speed.

Recommendations is in order to avert future occurrences in any locations where humanitarian activities take place in the Theatre of operation should be marked appropriately for ground and aerial identification in line with international best practices.

Also, the geographical and spatial coordinates of all areas of humanitarian activities within the Theatre, should be provided to the Theatre Command Headquarters.

Finally, there should be timely and mandatory exchange of information between stakeholders, for all activities in the Theatre of operation.

In another incidence that occured in Damaturu between Nigerian Army Personnel and Police in Damaturu. The report released that it was an armed clash between some Nigerian Army and Police personnel under Operation LAFIYA DOLE, in Damaturu on 11 April 2017, which led to the death of one soldier and 3 policemen, with 7 other policemen injured. It was caused by an avoidable misunderstanding from exchange of words and later physical confrontation.

Hence, the constitution of the Board of Inquiry, which made some findings and came up with recommendations, to forestall future occurrences.

The recommendations thus is that strict centralized operational and administrative control should be exercised, on all security agencies serving under Operation LAFIYA DOLE.

Offenders in the incident are to be sanctioned appropriately, to serve as deterrence to other personnel in the Theatre of operation.

The outcome of all disciplinary action, should be communicated to other parties.

In a related development in Calabar, Cross River State, the clash between Nigerian Navy and Police Personnel.

Recall on 30 May 2017, there was a clash between personnel of the Nigerian Navy and Police in Calabar, that led to the death of 2 policemen and shooting of a naval personnel, which was investigated.

The incident equally resulted in the destruction of properties. It was found that, the immediate cause was a misunderstanding between a naval rating and a policeman that escalated.

However, recommendations were made to forestall future occurrences and the committee made recommendations that the Nigerian Navy and Police, should institute further investigation to identify erring personnel for sanctions.

Security services should periodically remind their personnel to always comply with standing regulations, at all times and places.

All Nigerians and the general public are henceforth requested to continue to support the Armed Forces of Nigeria to tackle security challenges, while the troops remain committed to carrying out its roles professionally.