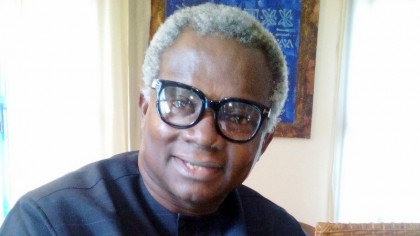 The Director General of Voice of Nigeria (VON), Mr. Osita Okechukwu has appealed to former Vice President, Atiku Abubakar and other well meaning Nigerians, to join President Muhammadu Buhari in restructuring the deficit infrastructure in Nigeria.
Okechukwu recalled that the former ruling party, the Peoples Democratic Party (PDP), did not restructure the infrastructure deficit during its sixteen-year rule, and APC which has only been in power for two years, should be given more time.
He spoke at his hometown, Eke in Enugu State during the weekend while responding to questions from newsmen on the statement by the former Vice President, questioning the ruling APC for voting against restructuring, contrary to the party’s manifesto.
On the issue of restructuring , the APC chieftain pleaded with Nigerians to think out of the box, pointing out that the voting was not essentially on party lines, but on the Nigerian fault lines or the national question, the same voting pattern in the Abacha, Obasanjo and Jonathan Constitutional Conferences.
This being the case, he appealed to all Nigerians to join President Muhammadu Buhari in restructuring first the substructure – adequate electricity, modern railways, agrarian revolution ICT education amongst others-the foundation on which all other social institutions (superstructure) are built.
Asked how he could cleverly absolve his party, the APC which control both the Senate and House of Representatives and which promised Nigerians to not only to restructure but to devolve power to the units, Okechukwu said nobody was denying the fact that APC promised devolution of powers, but made it clear that Atiku was too harsh by saying that APC betrayed Nigerians.
“Gentlemen of the Press, yes my dear party, the APC promised devolution of powers, even with our subsequent amendments, nobody is denying the fact. I was a member of the manifesto sub-committee of our great party’s merger committee co-headed by Messers Tom Ikimi, Ibrahim  Shekarau, Garba Gadi, of defunct Action Congress of Nigeria (ACN), All Nigeria Peoples Party (ANPP), Congress for Progressive Change (CPC) and factions of All Progressive Grand Alliance (APGA) and Democratic Peoples Party (DPP) led by Senator Annie Okonkwo and Olisaemeka Akumukalai of blessed memory.”
“But, I am disputing the former Vice President assertion that APC betrayed Nigerians. Betrayal is a harsh word. What I am saying in simplicita is that the Nigerian fault line or national question is deeper than APC’s manifesto line because of the diversity of our dear nation, dislocated and atrophied by deficit critical infrastructure, which President Buhari is borrowing money to address first. This is my thesis. Let’s think out of the box and join Mr. President to first fix Nigeria deficit infrastructure.”
On the PDP gaining mileage because of the failure of the APC to join the restructuring mantra, Okechukwu said it was his reason for appealing to Nigerians to think out of the box, warning that they should not be sentimental and play into the hands of PDP’s grand propaganda.
According to the VON DG, it amounts to sheer propaganda going by the history of the developed countries we emulate for the PDP and pro-restructuring to claim that with restructuring, the critical infrastructure would be easier as each region would address it according to its need.
Okechukwu recalled that at one time or the other Great Britain, USA, Germany, France, Japan and today’s China had a Buhari who laid the solid foundation for national railways, electricity, sprawling road network amongst others, adding that the British railways, the Hoover Dam and co were done by great leaders that come once in awhile.
He urged Nigerians to forget skewed appointments which are temporary and transient, and support Buhari, as “this is a golden opportunity for development.”
Reminded that majority of Nigerians think the regions would develop faster at their own pace, Okechukwu said it was not exactly the true position in Nigeria’s trajectory.
He queried: “One, Buhari had doled out over N1 trillion via Bail-Out and Paris Funds and close study showed that many governors didn’t judiciously and prudently administer the funds. Are they not the regional heads? Is even democracy growing at the state level when all the state houses of assembly are rubber stamp and no democratic local council elections? Finally, the PDP that is drumming restructuring, why not in their last sixteen years in power? Why are PDP Senators obstructing Buhari’s loan for infrastructure that is over one year in the National Assembly?”