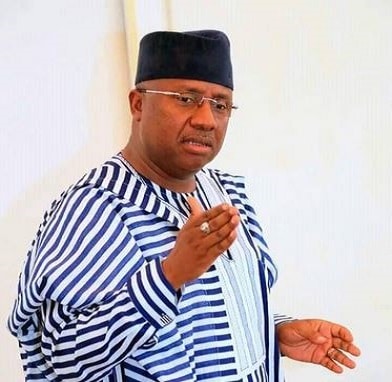 The Governor of Adamawa state, Alhaji Muhammad Jibrilla Umar Bindow has assured the leadership of the Federal Road Safety Corps (FRSC)  that the state government will stand by the Corps in its determination to address the challenges of road safety in the state, saying he appreciates the contributions of the Corps to the development strides of the state. Alhaji Bindow stated this in his remarks after his investiture as the patron of Special Marshals in Adamawa state.

According to the Governor, FRSC in the state has demonstrated competence, professionalism and honesty in the discharge of its statutory responsibilities, noting that such commitment has earned them respect among the people. He promised to use his new authority as the patron of Special Marshals in the state to further give support that could enhance the operations of the Corps in the state.

He particularly commended the Corps Marshal for his untiring commitment to issues of road safety, saying the state government fully identifies with his efforts to reduce road carnage through stakeholders’ collaboration. He further expressed appreciation to the FRSC for supporting the state government in its policy of opening up urban and rural roads in the state, saying it is only through safe and motorable roads that movement of the people could be enhanced to promote business and other activities of the people.

Governor Bindow implored the people to always obey traffic rules and regulations and support the activities of the FRSC, noting that road safety is collective responsibility. He pledged to use the instrument of the special Marshals to enhance the support of the state to the Corps.

In his remarks before decorating the Governor, the Corps Marshal, Dr Boboye Oyeyemi commended him for his steadfastness in supporting road safety campaigns, noting that the ongoing road construction works by the state government demonstrate its commitment to issues of road safety. He assured the Governor of the support of the FRSC to the success of the project, saying it aligns with the vision of the Corps to make the roads safe for the users.

The Corps Marshal particularly expressed delight at the success recorded in constructing 235 roads in the state within two years, saying the feat is commendable and would find support in the FRSC through increased presence of the Corps on all such roads to restore sanity on them. Oyeyemi recalled the importance of Special Marshals in the operations of the FRSC, stating that in the spirit of collective responsibility in matters of road safety, the Special Marshal initiative has remained an integral part of the Corps and members have the same powers of enforcement, rescue and public enlightenment with the Regular Marshals.

He further further stated that in sustaining the initiative, state Governors are invested as patrons of Special Marshals in their states to make them active participants in road safety campaigns. The Corps Marshal added that by Governor’s investiture, road safety activities in the state has gotten a boost as members of the state executive Council and the legislature are expected to imbibe the culture of safety in their use of the road.

As part of the investiture programme, the Deputy Governor, Engineer Martins Babale was also decorated  as Deputy patron in a ceremony that took place at the Government House, Yola.

Among those that witnessed the ceremony were the Speaker of the state House of Assembly, members of the state executive Council and the public.