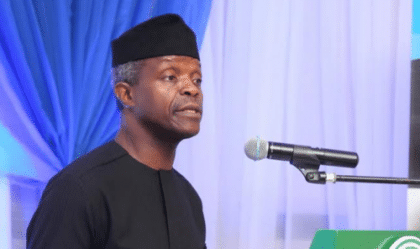 The Acting President, Prof Yemi Osinbajo, is to inaugurate the N10 billion WACOT Rice Processing Mill in Argungu, Kebbi, on Tuesday.
A statement by Alhaji Abubakar Muazu, the Chief Press Secretary to Gov Atiku Bagudu of Kebbi, in Birnin Kebbi said that the acting president was expected to arrive in Birnin Kebbi by 2 p.m. and proceed to Argungu for the inauguration.
Osinbajo would be accompanied by Chief John Odigie-Oyegun, the National Chairman of All Progressives Congress (APC) and the Chairman of APC

Governors Forum, Gov. Rochas Okorocha of Imo, to Argungu for the programme. APC governors, who were in Birnin Kebbi for their meeting, would also be part of the acting president’s entourage that would be in Argungu for the inauguration ceremony.

After the inauguration, Osinbajo would proceed to the Argungu International Fishing and Cultural Festival Village to witness an agricultural show tagged “Dalar Shinkafa’’ (Rice Pyramid), organised to showcase the rice production potential of Kebbi.

Speaking, Alhaji Bashar Aminu, the Chairman of the WACOT Rice Mill Ltd., said that the mill, which had the capacity to produce 400 tonnes of rice per day, would also provide employment for more than 1,000 persons.

“We have invested N10 billion to put up the rice mill as a multi-national company that has linkages in almost all the West African countries.

“We also have links with major marketers and manufacturers of agricultural products,’’ he added. (NAN)