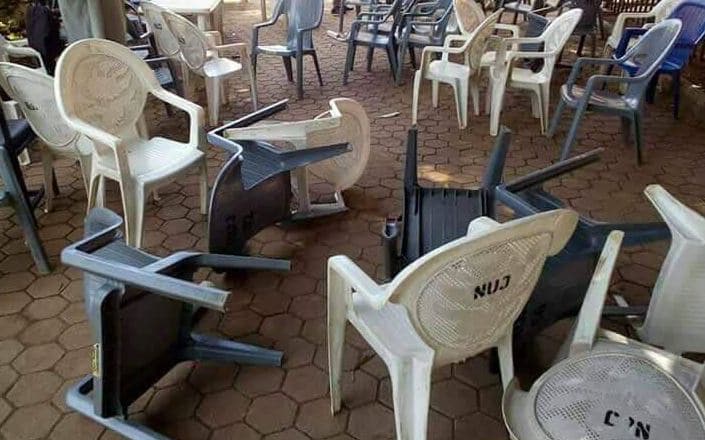 The Trade Union Congress (TUC) in Kaduna State, has described recent attack on journalists in the state by political thugs as an attack on democracy and free speech.

Chairman of the TUC in the state, Shehu Mohammed, made the remark on Thursday when he paid solidarity visit at the Kaduna State Secretariat of the Nigeria Union of Journalists (NUJ).

“We must all join hands together to ensure that democracy is not tampered with under any disguise for selfish political interest.

“We are here basically to sympathize with the council over the unfortunate attack and want to use this medium to call on the State Government to immediately set up a committee to investigate the attack.

“Fish out the perpetrators and their sponsors and bring them to book to prevent future occurrence,” he said.

The TUC chairman said the attack was unfortunate and condemnable, and urged journalists not to be cowed by anti democratic forces and those trying to silence free speech.

Vice President of the institute, Muktar Sirajo, said the attack on the journalists by political thugs was the height of intolerance and a clear show of political immaturity.

‎“As members of the society, people can agree and disagree to certain opinions but that should not be a reason to disrespect one another or engage in political attacks.

“The test of a man is his ability to agree and respect other people’s opinion; that is the essence of living together as everyone is entitled to his or her opinion.”

Sirajo stressed that all forms of political violence and thuggery must be condemned by all well meaning Nigerians.

Responding, Chairman of the NUJ in the state, Adamu Yusuf appreciated the visit and expressed concern over Sunday’s invasion of the union secretariat by political thugs.

Adamu who expressed surprises ‎over the attack, assured that no amount of intimidation will deter journalists from carrying out their constitutional responsibilities.

NEWER POST#PhotoNews: Is Not A Mining Site Rather Its The Only Source of Water To Kwarin Misau In Gombe
OLDER POSTNNPC, Shell and Chevron Sign Agreements to Boost FG Revenue by $16 billion