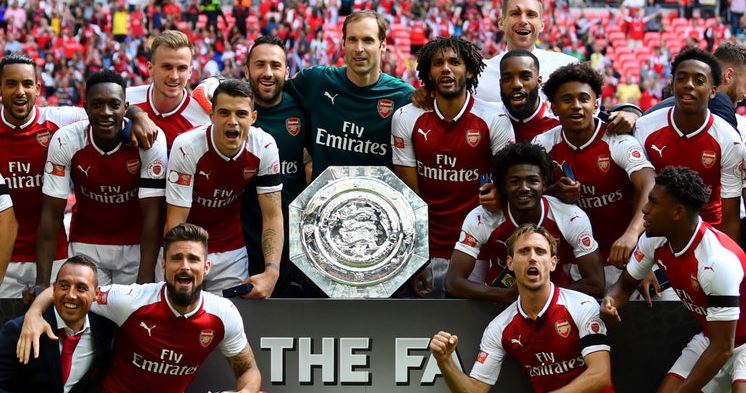 How Chelsea Failed To Beat Arsenal In Another Trophy Game

Chelsea have failed to beat Arsenal for the second in a competitive game for a trophy in 2017.

Antonio Conte’s side looked on course for victory after Victor Moses had fired us in front early in the second half, but with 10 minutes left to play Pedro was shown a straight red card for a foul on Mohamed Elneny, and Sead Kolasinac headed an equaliser from the resulting free-kick.

During the shoot-out, both Thibaut Courtois and Alvaro Morata missed their respective kicks, with the Gunners eventually winning 4-1.

With the fixture dedicated to the victims and those affected by the Grenfell Tower fire, prior to kick-off representatives of the emergency services carried the three trophies – Community Shield, Premier League and FA Cup – onto the pitch, and the Choir for Grenfell sang Bridge over Troubled Water. There was also a minute’s silence and a laying of wreaths in honour of those who lost their lives.

Having sustained a facial injury in our friendly win over the Gunners in Beijing a fortnight ago, Pedro returned to the starting line-up for the Blues, and it was Michy Batshuayi chosen to spearhead the Chelsea attack. Cesc Fabregas partnered N’Golo Kante in midfield while three of our new signings – Willy Caballero, Antonio Rudiger and Morata – were named among the substitutes.

The first couple of opportunities went Arsenal’s way, and after Alex Iwobi’s cut-back had somehow been scrambled away, Danny Welbeck, who had got in between Cesar Azpilicueta and Moses, headed straight into the arms of Courtois from a Granit Xhaka cross.

After being dispossessed by Welbeck, and subsequently tugging the Arsenal man back as he advanced towards goal, Azpilicueta became the first player to enter the referee’s book, and he was quickly followed by Hector Bellerin who was cautioned for a late tackle on his compatriot Marcos Alonso.

As the clock ticked past the 20-minute mark Arsenal went close to breaking the deadlock through their new signing Alexandre Lacazette. Bellerin broke down the right-hand side and switched it inside to the French striker, who exchanged passes with Welbeck before curling a right-footed strike against the foot of the post.

Arsenal were forced into a change just after the half-hour mark as Kolasinac, a summer arrival from Schalke, replaced the injured Per Mertesacker.

Willian and Pedro combined to fashion our first real opportunity of the game, with the Brazilian expertly picking out his fellow winger, who was denied by an impressive Petr Cech save.

The Blues were growing into the game as the half progressed, although Willian was booked for simulation after pouncing on a loose ball inside Arsenal box, but the last chance of note fell to Iwobi who fired straight down the throat of Courtois.

If the opening 45 minutes had passed by with few clear-cut opportunities, the game exploded into life within a minute of the restart as the Blues took the lead.

Willian’s corner was only partially cleared and, as Gary Cahill kept it alive by heading the ball back into the penalty area, Moses reacted quickest, bringing the ball under control with his chest before firing past Cech.

Having been sent off in the FA Cup final in a similar area of the pitch, it was no surprise the Nigerian celebrated wildly to mark a far more positive Wembley memory.

With our tails up, Batshuayi then hooked a volley into the arms of Cech after Fabregas’s cross was headed away.

At the other end, meanwhile, there was cause for concern when both Cahill and David Luiz went down requiring treatment after clashing heads while challenging for an aerial ball. Thankfully, both players were soon back on their feet.

Another decent opportunity went begging for the Blues as we broke at pace and Willian’s delivery, seeking out Batshauyi, was hacked to safety, while it required a brilliant David Luiz block to thwart Welbeck as Arsenal looked to hit back.

With 16 minutes remaining Conte made his first change of the afternoon with Morata, who received a wonderful ovation from the Chelsea supporters inside Wembley, coming on for Batshuayi.

Courtois then produced a stunning save to deny Xhaka, the Belgian diving to his right and turning the powerful drive around the post.

Within a few minutes of entering the action a chance fell Morata’s way when the Spaniard arrived at the far post to meet a sublime Willian pass, but he was unable to keep the strike down.

Having looked in control of the contest, however, a late tackle by Pedro on Elneny saw the Blues reduced to 10 men, and from the resulting free-kick Kolasinac arrived in the box to head Arsenal level.

Antonio Rudiger and Charly Musonda came off the bench for the Blues, with the young Belgian tasked with helping out Fabregas and Kante in midfield, as well as getting forward to support Morata, but with a one-man advantage it was Arsenal making the majority of the running during the closing stages.

With both teams chasing a late winner, Morata glanced a header wide from a Fabregas free-kick and Cahill produced a fine block to deny Walcott, meaning the contest would be decided by penalties.

Cahill scored to give us the lead, before Walcott and Nacho Monreal both converted to put Arsenal in front. Courtois then stepped forward for the Blues but blasted his kick over the bar, while Morata’s effort struck the post and rolled wide. Arsenal knew they could win it by scoring their next two kicks, and both Oxlade-Chamberlain and Giroud made no mistake.