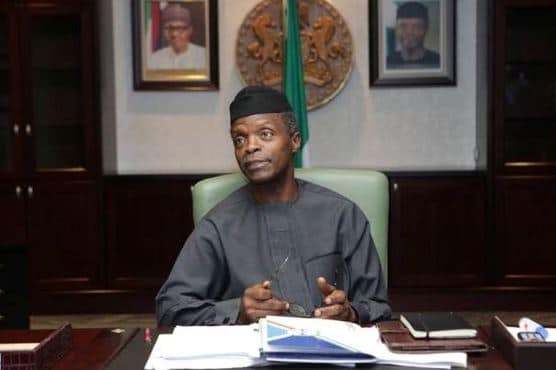 The Acting President, Prof. Yemi Osinbajo, on Sunday said the problem in Nigeria was not unavailability of resources, but their management.

According to him, the Federal Government is now doing more when funds are scarce than in the days when oil was selling at over 100 dollars per barrel.

Osinbajo stated this when he received Dr Oluyinka Olutoye, a U.S.-based Nigerian medical doctor, who achieved a feat with the treatment of a foetus in the U.S., at the Presidential Villa, Abuja.

Congratulating Olutoye for the sterling performance, he said “Nigeria produces the best in every way; its citizens continue to shine in various ways around the world.

“As we continue to do what is right in public service, the country is bound to reach the top globally as a people.’’

In a rare medical feat, Olutoye brought out a foetus from a woman’s womb to remove a tumour from it, and restored the unborn baby to the womb successfully.

The woman, Margaret Boemer, then continued to carry the pregnancy to term and was later delivered of the baby safely and well.

Osinbajo told Houston-based Olutoye, who was accompanied to the Villa by members of his family, including his wife and parents that, “our country continues to shine in various ways.

“Your achievement is remarkable in every sense. People are bound to wonder; it’s the kind that fables are made of, and this is from someone who is Nigeria-trained.”

He said that Nigeria could be well run, but that it would take “a lot of doing by good men and women,” adding that the country produced the best in every way.

The acting president said that in the past two years, he had learnt that “if we do the right things, day-by-day, we’ll change and improve the Nigerian situation significantly.

“When we were making over 100 dollars per barrel of oil, we were owing oil JVC cash-calls, not able to pay salaries and owing contractors.

“Now that we are down in earnings by 60 per cent, we have sorted out the problem of cash-calls and are able to support states to pay salaries.”

Earlier, Olutoye had attributed his medical successes in the U.S. to his Nigerian training and education up till the university, having graduated in Medicine from the then University of Ife (now Obafemi Awolowo University), Ile-Ife.

For the feat, Olutoye won U.S and world recognition.