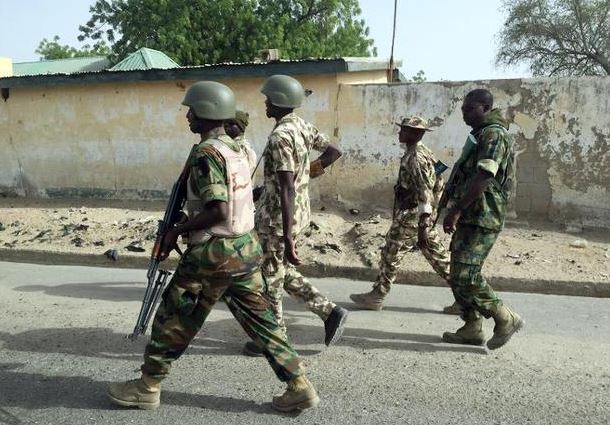 Troops Neutralise Over 13 Terrorists In An Ambush

Troops of the Operation Lafiya Dole neutralised over 13 terrorists on Saturday in various areas in Borno and Adamawa during clearance operations.

The army spokesman, Brig.-Gen. Sani Usman, who confirmed this in a statement, said 12 were neutralised when the troops laid ambushed for them at Miyanti-Banki junction in Borno and one at Kafin Hausa in Madagali Local Government Area of Adamawa.

Usman added that at Dukje-Mada road near Gulumba Gana village, the troops neutralized quite a number of the terrorists.

“Unfortunately, two soldiers lost their lives when their vehicle stepped on an Improvised Explosive Device (IED) buried along the road, while four others sustained injuries.

“The remains of the gallant soldiers, that paid the supreme price, and the wounded have been evacuated to Maiduguri,” he said.

He listed items recovered from them as 18 bicycles, 30 bags of flour, one bag of groundnut, two bags of salt, two baskets of kola nut and five torch light, a carton of mixed juice sachets and four rolls of brocade material.

He also listed two rolls of sewing thread, four kegs of herbicide, 14 packets of insecticide, one keg of groundnut oil, a bag of pepper and cN4,000 as items recovered from them.

Usman added that the troops recovered nine primed cylinders from the terrorists’ Improvised Explosive Devices making factory and destroyed the factory, as well as one AK-47 rifle with registration number 02527 MTD and a magazine.