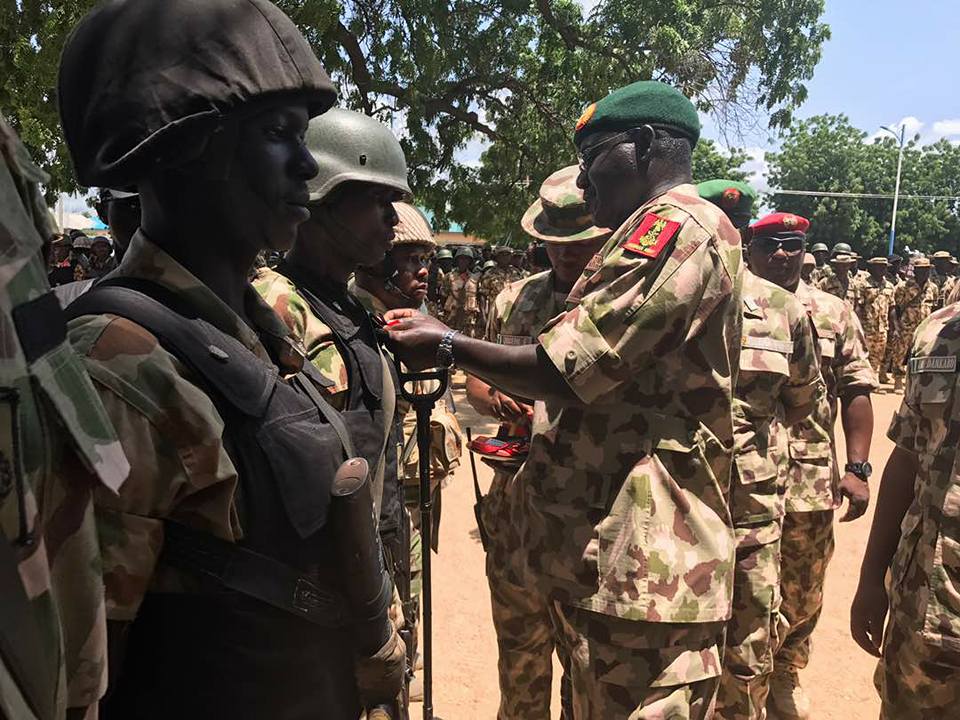 The beneficiaries came under Boko Haram terrorists attack in 2 separate occasions, but were able to manoeuvre their way out of the ambush and engaged the terrorists, inflicting heavy casualties on them and also capturing their weapons, Improvised Explosive Devices, Gun trucks and logistics on 10th July 2017.
During his address to the troops of 21 Brigade in Bama, shortly after presenting the gallantry awards, the COAS described soldiering as a call to national service.

Buratai congratulated the troops for the successes achieved so far in the ongoing clearance operations against the remnants of Boko Haram terrorists. He urged them not to rest on their oars but conclude the fight against Boko Haram Terrorists and return back to barracks to continue with training and other routine duties.

Earlier, the COAS had a stop over at 202 Battalion location in Awulari along Bama Road, where he witnessed the test firing of an artillery weapons by 304 Artillery Regiment and thereafter proceeded to visit the Alau Dam along Konduga road. The COAS and his entourage joined the troops on patrol in gun boats stationed at the jetty.

It would be recalled that the COAS has in compliance with the Acting President, Prof Yemi Osinbajo’s directive to service chiefs since returned to the Theatre and has been touring various Army formations under Operation LAFIYA DOLE.

On Monday, 7th of August the COAS visited 25 Task Force Brigade, 7 Division Nigerian Army, in Damboa where he was received and briefed by the Brigade Commander, Brigadier General Quadri. This was on his way from Buni Yadi in Yobe State where he went to monitor and participate in the training of troops of Mobile Strike Teams that are due to be injected into Operation LAFIYA DOLE to enhance a more robust clearance operations against the remnants of Boko Haram terrorists in the North East.