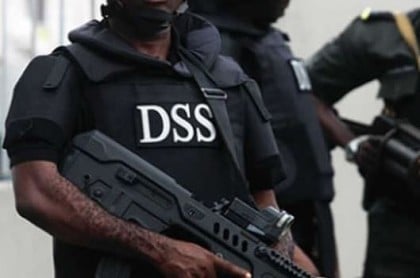 The Department of State Services (DSS) said it has arrested some kidnappers and Boko Haram cell leader during its tactical operation across the country between the month of July and early August. In a statement issued by Tony OPUIYO  in Abuja stated that it is part of the effort to degrade, contain and deter terrorists/Insurgents, Kidnappers and other criminal elements.

Read the Full statement below;

The Department of State Services (DSS) wishes to inform the public of the successes of its tactical operations in parts of the country in July and early August, 2017.  This is in consolidation of efforts to degrade, contain and deter the activities of terrorists/insurgents, kidnappers and other criminal elements.

On 3rd July, at Kakuri Industrial Area in Kaduna State, the Service arrested one Haliru HASSAN and six (6) other members of a notorious kidnap gang operating along the Abuja – Kaduna High Way. The gang, which comprised Usman ABDULKADIR, Yusuf SAIDU, Abubakar SHUIABU, Abukakar SULEMAN, Uzairu BAWA, and Sani ABUBAKAR, has been terrorizing motorists and commuters within the Rijana and Katari axis of the Abuja-Kaduna Highway.

On 4th July, 2017, along Zaria – Funtua Road in Giwa LGA, Kaduna State, the Service busted another kidnap gang and apprehended its kingpins, Rabiu SANI aka DOGO and his close associate, Abubakar SANI. SANI is a notorious kidnapper and gun-runner who has been supplying arms and ammunition to criminal elements in Kaduna, Kano, Taraba and Plateau States. During their arrest, the following items were recovered from the duo:

Similarly, on 5th July, 2017, at Ikara Junction, Tudun Wada LGA in Kano State, two (2) high profile kidnappers namely: Rabiu DAHIRU aka KACHALLA and Umar YA’U were apprehended by the Service. DAHIRU and YA’U are members of the kidnap gang which has been operating at the Falgore forest in Kano State. Twenty six (26) live cartridges and a bullet proof vest were found in their possession during their arrest.

Also, on 4th August, 2017, this Service arrested a suspected gunrunner, Haruna MUSA at Kasuwan Magani area, along Kaduna-Kachia Road in Kaduna State. MUSA is a gun-runner who has been ferrying arms and ammunition to criminal elements especially kidnappers along forested communities in Birni Gwari and its environs. The following items were recovered on him during his arrest; Opel Vectra V6 car with Reg. No. 899-MKA (grey colour), Thirty one (31) AK-47 magazines.

On 14th July, 2017, at the Federal Housing Authority Estate, Lugbe, FCT, the Service smashed the kidnap syndicate led by one Ebifagbe DICKSON aka GINIKACHI and five (5) others namely: Williams JEPHTER, Messiah PHILIPS, Sample REUBEN, Prosper EBITARI and Charles Krobo JAMES. This gang was responsible for the kidnap of five German expatriates of Bayelsa Coastline in Brass LGA, was also intercepted while plotting to perpetrate series of kidnap operations in the Federal Capital Territory-Abuja

In Kogi State, the Service arrested Jonathan LUKAS and his accomplice, Nafiu USMAN at Ajipome, Dekina LGA, on 27th July, 2017, for their involvement in the series of kidnapping incidents in the State.

In furtherance of its counter-terrorism/insurgency fight against the extremist elements, the Service conducted a tactical operation against fleeing Boko Haram fighters on 1st July, 2017, at Sakwai in Kachia LGA of the Kaduna State. During the operation, one Usman MUSA, a high profile Boko Haram cell leader, was apprehended alongside six (6) of his accomplices, namely Isa HALIDU, Ibrahim DAUDA, Bature MOHAMMED, Buhari DAUDA, Inusa USMAN and Adamu IBRAHIM. Light arms, ammunition and radical literature were recovered from the cell.

In Taraba State, the Service intercepted one Usman HALAJI aka Abubakar MUBI, on 5th July, 2017, at Bali town, where he  was hibernating after fleeing Sambisa Forest following military bombardment of the area. He was discovered to be advancing the doctrines of the terrorist group as well as recruiting vulnerable minds to join its ranks.

On 13th July, 2017, another cell amir (leader), one Yusuf ISAH was arrested at   Sabuwar Yelwa area of Dala LGA in Kano State. It was sequel to this that a member of the cell, one Yakubu USMAN (Alh.) who had also fled from Sambisa forest following military operations in the North East was arrested, on 28th July, 2017, by the Service.

Furthermore, on 3rd August, 2017, two (2) suspected Boko Haram fighters namely Buba GEBI aka Dogo Dan Cameroon and Manu ISAH, were apprehended by the Service at Tamburawa, Dawakin Kudu, Kano State, on 3rd August, 2017. The duo were intercepted while heading to Lagos, in furtherance of the group’s cause.

The Service also arrested one Bashir Yahaya OJO, a suspected member of an ISIS-affiliated extremist cell and close associate of BILAL aka MALIK, another extremist element at Nagazi in Adavi LGA. OJO, in connivance with other members of the cell, has been indoctrinating and recruiting vulnerable youths in the State for the extremist group.

On 10th August, 2017, at Kwatte Village, Rigasa District, Igabi LGA in Kaduna State, the Service, in conjunction with the Military, raided the hideout of a notorious armed robbery/kidnap gang led by one Salisu LAWAN. During the operation, the criminals engaged operatives in a shoot-out, which resulted in the death of one Shehu LAWAL (a gang member) while LAWAN the ringleader and two (2) other members of the gang, namely Mohammed TUKUR (27 years) and Usman Mohammed (35 years) were arrested.

In a bid to contain the boundary crisis between Ikot Offiong Community in Odukpani LGA of Cross State and Okuiboku in Itu LGA of Akwa Ibom State, the Service carried out a detailed investigation and found that a militant group led by one Don MARINE aka The Don based in Odukpani is a key provocateur in the crisis.   Consequently, on 10th August, 2014, the Service, in liaison with the Nigerian Army, raided the militants’ enclave located along Ikonoto Road, Ikonoto clan of Odukpani. During the operation, one BLANKO was shot dead while three (3) others were arrested and two (2) escaped with gunshot injuries.  Similarly, one (1) dane gun and an American pump action gun were recovered from the hide-out.

The Service wishes to acknowledge the efforts of the general public in providing critical and actionable intelligence, which have continued to enhance its operations and those of other relevant security agencies in degrading and containing the activities of criminal elements and groups across the Federation. It is hoped that this spirit of cooperation and support would further be sustained towards maintenance of prevailing peace, law and order in the Country.