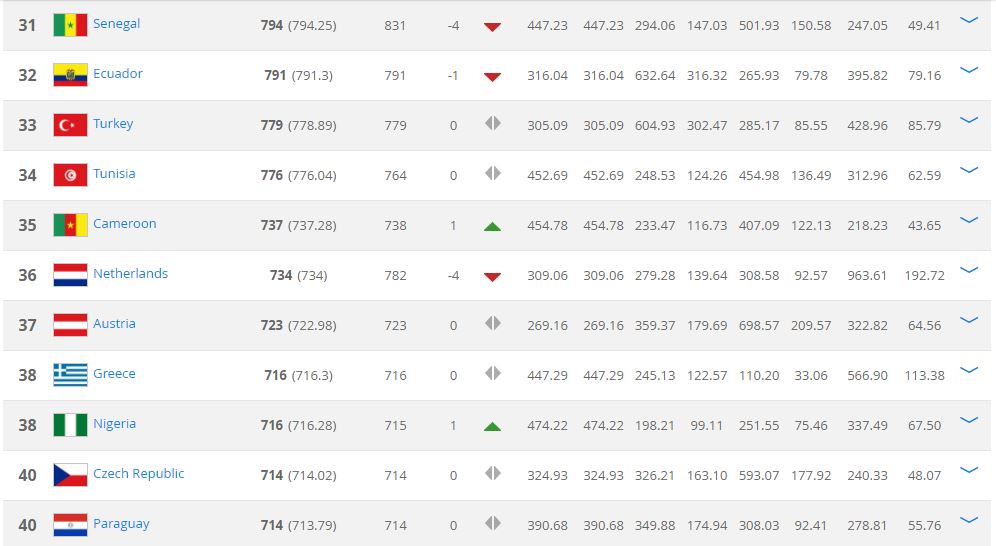 Nigeria moves one place up in the latest FIFA CocaCola World ranking released yesterday and Brazil are back on top while Gold Cup performers climb.

Nigeria is 6th in Africa behind their next opponent in Nations Cup qualifier, Cameron and above Burkina Faso and 38th in the world.

Senegal and Tunisia are in 3rd and 4th position respectively, while Algeria, Ghana and Côte d’Ivoire makes up the top ten nations in African ranking, where they are placed 8th, 9th and 10th places respectively.

However, Brazil have returned to the top of the FIFA/Coca-Cola World Ranking after a one-month hiatus, replacing reigning FIFA World Cup™ champions Germany (2nd, down 1), who slipped back into second spot.

Monitored from FIFA.com, Argentina remain in third but the heavyweight trio are accompanied in the top five by two sides reaching unusually heady heights. Switzerland (4th, up 1) have reached their highest position since the very first month of the World Ranking (they were third in August 1993), while Poland (5th, up 1) are at an all-time high. Neither have dropped in the standings for 11 months.

Portugal (6th, down 2) make way for the pair, while Belgium (9th, up 1) are the only other climber within the top ten.

The CONCACAF Gold Cup was responsible for some major movement further down the table, with defeated finalists Jamaica (57th, up 19) accruing the most points over the month. Meanwhile, champions USA (26th, up 9), Costa Rica (21st, up 5) and Mexico (14th, up 2) all moved up the standings.

A special mention also goes to Namibia (136th, up 20), who were the month’s biggest climbers.

The next FIFA/Coca-Cola World Ranking will be published on 14 September 2017.