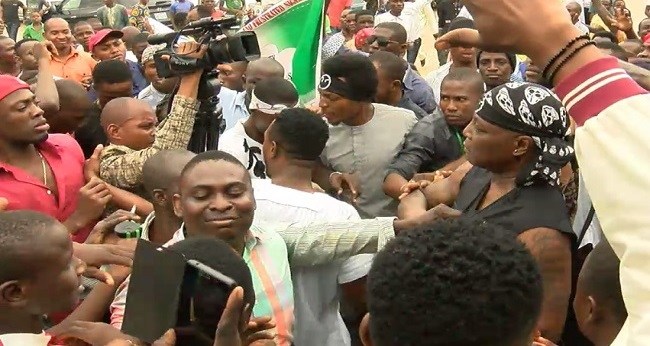 How Police Rescued Charly Boy and Other Members

Anjuguri Manzah, Abuja: The FCT Police Command has rescued Charles Oputa aka Charlie-boy and other members of the Concerned Citizens Group from being lynched by an angry mob who attacked them during their mobilisation campaign at Wuse market on Tuesday 15th August, 2017.

While at Wuse Market, the group was attacked by a mob and in response to a distress call the Police moved in and rescued Charlie-boy and his co-travellers. The Police was also able to prevent the angry mob from burning a Prado jeep and a BMW car belonging to Charlie boy and his members.

The vehicles which were towed by the Police to Wuse Division were later released to Charlie boy and his team.

In the process of protecting and securing Charlie boy and his group members from the hands of the mob, many policemen were injured including the Divisional Police Officer Utako, CSP Jimoh Gbenle.

The Command has since restored normalcy to Wuse Market and all other parts of the Federal Capital Territory (FCT). We urge all law abiding citizens to continue to partner with the Nigeria Police Force to ensure peace and tranquillity reign in FCT. Meanwhile, the Command has deployed uniform and plain-cloth policemen in all flash points to forestall any breach of the peace.

Protesters are advised to always liaise with the Police so that the Police can provide them necessary security and proffer necessary advice.