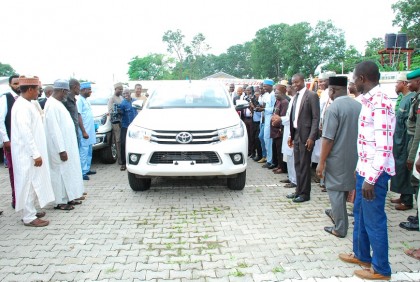 Niger State Governor, Alhaji Abubakar Sani Bello on Tuesday distributed  47 vehicles, worth N 200 million to aid the effectiveness and efficiency of the state workforce according to the Chief Press Secretary, Jibrin Baba Ndace

The vehicles were distributed by the governor in Government House  Minna, the state capital.

Distributing the vehicles to representatives of the relevant agencies, the governor stated that the vehicles were distributed despite the economic challenges to enable officials of the benefiting agencies to  carryout various responsibilities in their various Local Government Areas.

“We have resolved to support our civil servants, political appointees and everyone that works for Niger state with what they need to function efficiently and effectively despite the scarce and limited resources.”

“As difficult and expensive as things are, we have raised money to deprive some sectors so as to provide vehicles to allow a very functional government and I expect you to manage and maintain these vehicles very well. Government will not hesitate to deal with any one found abusing any of the vehicles,” the governor warned.

The National President and Chairman of Association of Local Government Chairmen of Nigeria (ALGON), Alhaji Gambo Tanko who received the vehicles on behalf of the benefiting local government chairmen commended the government for providing the vehicles to enable them carry out their responsibilities.

The ALGON boss who is also the chairman of Rafi Local Government area of state assured the governor of proper utilization of the vehicles.