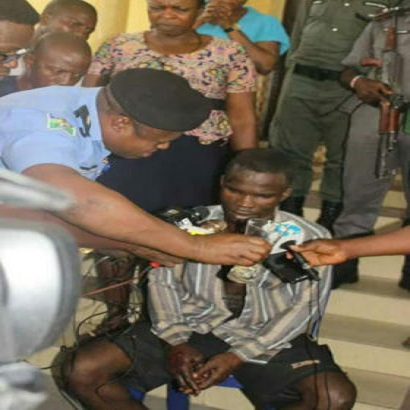 Some residents of Eliozu area of Port Harcourt on Wednesday protested the unfortunate escape of Mr Ifeanyi Dike, a suspected ritual killer from police custody.

The Rivers Police Command had paraded Dike for raping and killing Miss Victory Chikamso, an eight- year old girl residing in the same compound with him.

Mr Promise Wobo, a resident of Eliozu said in Port Harcourt that the protest was to call on the Rivers Police Command to re-arrest Dike.

Wobo said that it was an embarrassment to Nigeria for a suspected ritual killer to escape from police custody.

“It was our local vigilance team that caught him when he was attempting to dispose of the body.

“He was handed over to the police for interrogation and prosecution but it’s so unfortunate and embarrassing for him to have escaped from the custody.

“All we want is, the police should re-arrest the suspect and prosecute him together with the officer that allowed him to escape,” he said.

Mrs Alaerebo Jack, one of the protesters, said that the police had no excuse as to why the boy should escape from their custody.

Jack said that the protest was to call on the Rivers Government not to allow the police authority to bury the matter without justice.

“We are calling on Gov. Nyesom Wike to act within his powers to ensure that the police are made to re-arrest Dike to face prosecution.

“The killing of the eight- year old girl is ungodly and against the laws of the land but instead of the police to act professionally, they decided to allow the killer to escape,” she said.

Another resident of Eliozu, who participated in the protest, Mr Chike Boms, said that they had lost confidence in the Nigeria Police to protect them.

“If a ritual killer suspect that was handed over to the police can escape from custody, how can they even protect the citizens?

“The officer in-charge of the matter that allowed Dike to escape should be held responsible and dealt with while the police authority also should sanitise their system,” he said.

Boms frowned at the decision of the police to disperse them with force.

The suspect, a 200 level undergraduate student of the University of Port Harcourt, had earlier admitted having committed the crime.

Dike confessed that his victim died when he was cutting-off parts of her body that were requested from him.

The victim’s body was mutilated as her eyes, private part and some fingers were removed.

Dr Earnest Mezuwuba, the father of the victim, urged the Police to ensure that the suspect was re-arrested to face the law.

Meanwhile, the Rivers Commissioner of Police, Mr Zaki Ahmed, said that the officer who was in charge of the case, Mr John Bosco, had been arrested and detained.

Ahmed also assured the people of Rivers that the police had deployed all necessary means at its disposal to re-arrest the suspect.

He said that the protesters were asked to open up the road they blocked and leave so that criminals would not exploit the protest to commit crime.