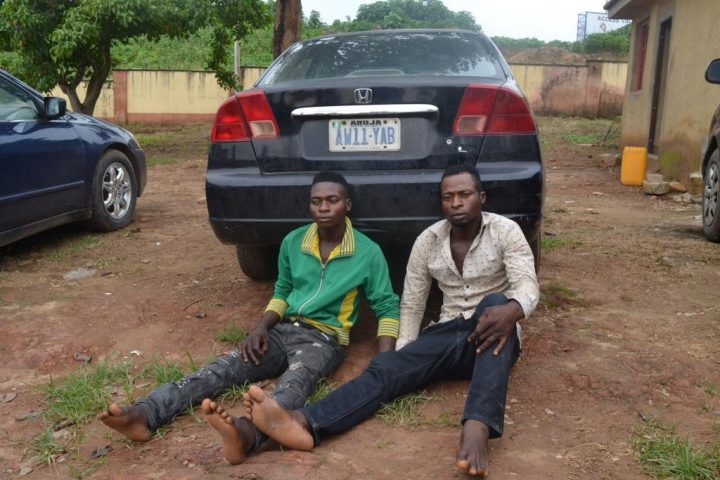 The FCT Polce Command said it has arrested two brothers who specialise in snatching cars from cab (taxi) operators. Commissioner of Police FCT, CP Musa Kimo psc has enjoined taxi drivers in the Federal Capital Territory on the need to be vigilant and alert when picking passengers.

This was stated in a press release made available to the media by the Command’s Police Public Relations Officer, DSP Anjuguri Manzah in Abuja.

He said that the FCT Police Commissioner, CP Musa Kimo psc enjoined taxi drivers in the Federal Capital Territory on the need to be vigilant and alert when picking passengers.

According to him, the Commissioner noted this while receiving security brief from the Divisional Police Officer Asokoro, CSP Aisha Yusuf on the arrest of the two brothers.

The suspects Solomon Manger ‘m’ 26 years and Isaac Manger ‘m’ 22 years of Koti, Kwande Local Government Area, Benue State were arrested on 24/08/2017 at about 9:20pm by Police operatives attached to Asokoro Division on pin-down at Abacha Barracks overhead bridge en-route Kuruduma village, following a report that on 23/08/2017 about 9:00pm the duo had robbed one of their victims of his black Honda Accord car.

The suspects who operate between Wuse to Kuruduma village via Abacha Barack Bridge were nabbed by eagle-eyed Police operatives after their fresh attempt to snatch another car from a cab operator whose services they engaged from Wuse Zone 2 was foiled by the police team.

Following their arrest, the suspects confessed to have sold a Honda Accord car they had snatched a day before the arrest for Forty Thousand naira (N40,000) to their cohort who is currently on the run.

Meanwhile, the black Honda Accord with reg. no. AW 11 YAB has been recovered and the owner contacted.