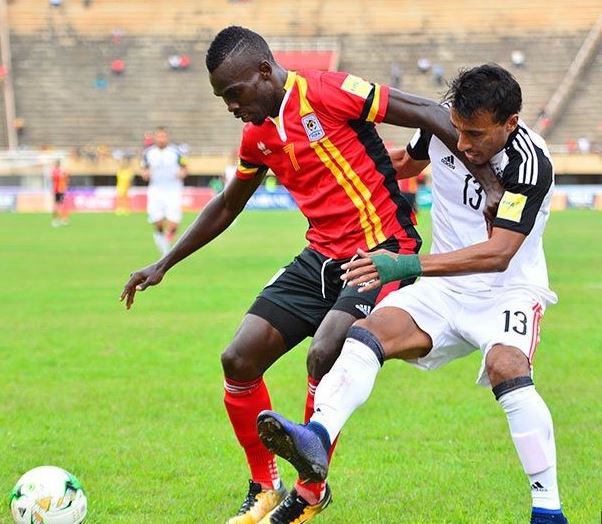 Uganda Upsets Egypt, Tops Group On The Road To Russia 2018

Cranes of Uganda got a hugely important three points for the Russia 2018 World Cup Qualifying race in Group E of the Africa qualifiers.

The beat the Pharaohs of Egypt 1-0 in Kampala on Thursday. The now move to the top of the group.

Emmanuel Okwi’s strike early in the second half made the difference for Moses Basena’s side, who remain the only side in all of Africa to not concede a single goal in Russia 2018 qualifying so far.

Uganda moved to seven points after three matches in Africa’s Group E, ending Egypt’s 100 per cent record as they upset the odds in a dominant home performance that provided them with their first win over Egypt in more than a half century.

Okwi took advantage of the Egyptian defence, notably new West Bromwich Albion signing Ahmed Hegazi, backing off as he jinked his way into the penalty area and hammered the ball home in the 51st minute.

The goal came soon after Egypt’s 44-year-old goalkeeper Essam Al Hadary had made the second of two close-range stops to deny the home
country, who have never previously played at the World Cup finals.

The Pharaohs will have the opportunity to regain the top spot if the beat Uganda in the second fixture as the two sides will meet again in five days’ time in Alexandria.