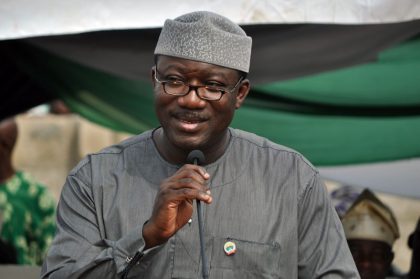 The Federal Government has restated its support for the success of the nickel project as well as other genuine investors in the mining sector as a way of actualising its economic diversification plan.

It however urged investors in the sector to engage and build mutually beneficial relationships with the host communities through the state governments.

The Minister of Mines and Steel Development, Dr Kayode Fayemi, disclosed this in his presentation at the opening session of the Africa Down Under (ADU) Conference in Perth, Australia on Wednesday.

Fayemi spoke to a gathering of African Ministers of Mines and Minerals, policy makers, investors, operators and mining financiers at the conference where the massive deposit of world class Nickel in Dagoma, Kaduna State and its prospect as a game changer for the Nigerian economy dominated discussion.

The Minister outlined government’s support for the nickel project as well as other genuine investments in the mining sector, insisting however that government would not compromise its laws and regulations.

Fayemi, whose presentation was titled : “Mining for Shared Prosperity: Why Nigeria, Why Now”, said government would support the nickel project and other investors to move from resource find to exploration and processing.

He, however urged investors to work with the state governments in their community relations engagement, in order to build harmonious working relationship with the host communities.

“The host communities should have a stake in your investment. Once that is done, they would see themselves as part- owners and would ensure noone sabotage your efforts. This, we have learnt through experience”, he added.

Speaking on the  nickel deposit, reputed to be of a high grade and a “rare find” and which covers about 20 kilometre square in Dagoma village, Southern Kaduna, the Minister said  security of the environment was one of the first major steps taken by government to ensure the success of the project.

He added that government is also collaborating with Comet Minerals limited (that discovered the mineral) on sundry other aspects of the project.

Dr Fayemi said the nickel discovery could be a game changer if properly managed, adding that government would support it all through in line with the wealth creation and job creation agenda of its diversification plan.

He listed the Federal Government’s incentives for investors including tax holidays (which is renewable), duty waiver on imported mining equipment and 100 ownership of business concern among others.

He, however said that government would insist on best practices with emphasis on enforcement of law and order.

Nothing that the country’s mining law is one of the best in the world, Fayemi said enforcement had always been a challenge. “This government would insist on the enforcement of law and order”.

Hugh Morgan, Director of Comet Minerals Limited, in his presentation, attested to the support of the Ministry of Mines and Steel Development over the nickel discovery.

Morgan said his company has started engaging the community, having drawn the land ownership map of the areas covered by the nickel deposit.

A Geology Professor, Lousia Lawrence disclosed that a lot of work had gone into authenticating the high quality nickel deposit. This, she said had further proven that the nickel deposit could be the game changer for Nigeri