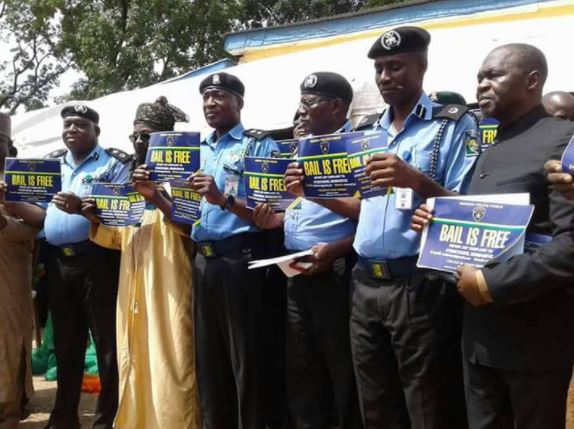 The Inspector General of Police (IGP), Ibrahim Idris on Wednesday gave a directive for the launch of the ‘BAIL IS FREE’ Campaign across the country.

The IGP, who was represented by the Force Public Relations Officer, Headquarters, CSP Jimoh Moshood in his remarks said, that the launch starts on today in Niger State.

Moshood said: “The IGP on assumption of duty on the 22nd June, 2016 promised to reposition the Nigeria Police Force to be more accountable, responsive, responsible and reliable under his leadership. You will agree with me that these declarations are already manifesting and being accomplished.

In furtherance of the above objectives, the IGP and Management Team have embarked on aggressive community and people oriented engagements to bring the Nigeria Police Force closer to the people so as to ensure effective service delivery to all Nigerians.

The Eminent persons Forum which is a platform to strengthen the community policing strategies of the Force to tackle ethnic, religious and communal disputes and crisis that bedeviled some parts of the country was launched throughout the thirty six (36) states of the Nation and the Federal Capital Territory, Abuja and it has been achieving the desired results.”

The Police spokesman said that to accomplish the tasks of stimulating positive conducts of the entire personnel of the Force towards the fulfillment of the agenda of the Inspector General of Police and management team, the ‘creed’ for the Force was fashioned out to be words and guiding principles for all officers and men in carrying out their duties and in the discharge of their day to day official responsibilities.

He said: “While ensuring compliance with the above, the Inspector General of Police and management team pays special attention to issues of corruption allegations most especially as it concerns BAIL of suspects in Police custody.

The Inspector General of Police has therefore directed the launch of BAIL IS FREE campaign in all the Thirty Six (36) states of the country and the FCT, starting today from Niger State Police Command, ‘B’ Division in Minna.”

“They are to report to the nearest Police Station the conduct of any Police Officer, Investigative Police Officer (IPO) or any other Officer that ask for

“money or pecuniary benefit before, during or after BAIL is granted to the Divisional Police Officers (DPOs), Area Commanders, The Command Public

Moshood encouraged people to paste the sticker “BAIL IS FREE” on their vehicles, conspicuous locations and public centres to assist the Police to spread the campaign.

“The IGP has equally directed all Assistant Inspectors General of Police and Commissioners of Police to immediately ensure that ‘’BAIL IS FREE’’ is pasted in the crime branch, statement room, charge room and other conspicuous locations in all Police Divisions, Police Stations and Outposts throughout the Country.

“The Inspector General of Police has sent out the X-squad of the Nigeria Police Force to all the states of the country to monitor compliance to “BAIL IS FREE” campaign and given power to arrest, detain and discipline any erring Police officer.” He added.

Moshood concluded, saying that the IGP enjoined the public to assist the Police to make the campaign a huge success by reporting any complaint through the mentioned avenues.