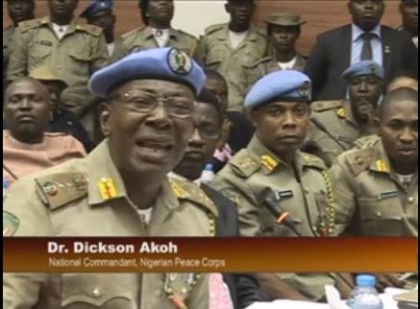 The Senior Assitant to President Muhammadu Buhari on National Assembly
Matters (Senate), Sen. Ita Enang, says Nigeria Peace Corps Bill is yet
to be presented to the President for assent.

He told the News Agency of Nigeria (NAN) in Abuja that the bill was
yet to complete its legislative process at the National Assembly.
Enang said that he was unaware of any bill that had been passed by the
legislature that was pending before Buhari for his endorsement.
“I have heard some members of the public saying that the Petroleum
Industry Bill has been passed and has not been assented to.
“Some said that the Peace Corp Bill has been passed and sent to the
president and has not been signed or that it is already a law and
people have started buying forms.
“Some said that they have started sowing uniform and that some states
have started operations, as if Peace Corp, as if it were, is a law.
“I want to use this opportunity to say the Peace Corp legislative
process has not yet been completed to the extent that it should be
forwarded to the president
“It has not been forwarded to the president and so, it is not yet
pending for assent,’’ he said.
Enang advised the public not to be worried about the bill, and warned
that anybody acting on the bill, whose legislative processes were yet
to be completed, was illegal.
“The Bill processes have not been completed and it has not been
forwarded to the president for assented to become law, and therefore,
anything anybody does, using the bill is at the person’s risk.
“As an agency that has not been established, it cannot start
operation; it cannot engage people, it cannot generate revenue unless
and until it is established by law. Therefore, I will urge Nigerians
not to be worried.
“The last time before the bill went back to the legislature, the
Federal Government, the police and other agencies did something to
draw attention to the status of the Peace Corp but it does appear that
it is going back to where it was.’’
It would be recalled that Bill establishing the Corps, which was
sponsored by Sen. Bayero Nafada (APC-Gombe), was passed by the Senate
in July, 2017.
The bill was passed in a unanimous voice vote after the Chairman,
Committee on Judiciary, Human Rights and Legal Matters, Sen. David
Umaru, had presented report on issues surrounding adoption of the
conference report on it. (NAN)