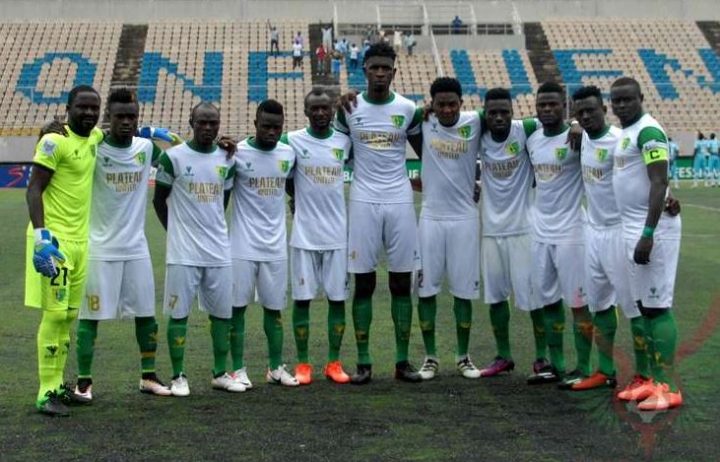 New champions of the Nigeria Professional Football League, Plateau United will take over Lokoja on Wednesday with their army of supporters as the first leg, quarter final matches of this year’s Aiteo Cup competition take place across the country.

They will clash with Niger Tornadoes of Minna (who have made Lokoja home for the past two seasons) at the Confluence Stadium, where Tornadoes turned back Shooting Stars of Ibadan 2-0 in the Matchday 38 of the NPFL penultimate weekend to seal their Premiership status.

The boys from Tin City have a mountain to surmount, with Tornadoes never having lost in Lokoja in all 38 home matches over two seasons in the Confluence State.

In Oshogbo, a tantalizing South –West derby is on the cards as NNL side, Osun United take on NPFL club, Sunshine Stars. The boys from the State of the Living Spring have surprised not a few persons by reaching this stage.

Another big clash sees FC IfeanyiUbah clash with ABS FC in Nnewi-Ozubulu, while the clash between Akwa United and Katsina United Feeders in Uyo has been moved to Saturday, following a special request by the Katsina Feeders’ Management.

In the women’s competition, Bayelsa Queens and Nasarawa Amazons (two of the strongest sides in the Nigeria Women Premier League) will set alight the Nembe Stadium, just as Ibom Angels and Pelican Stars will battle it out in a potentially –explosive South –South derby in Itam.

Champions Rivers United will clash with Edo Queens at the Yakubu Gown Stadium, while Confluence Queens, who turned back Sure Babes 3-0 in the Round of 16 in Lokoja, will visit Abia Angels in Umuahia.