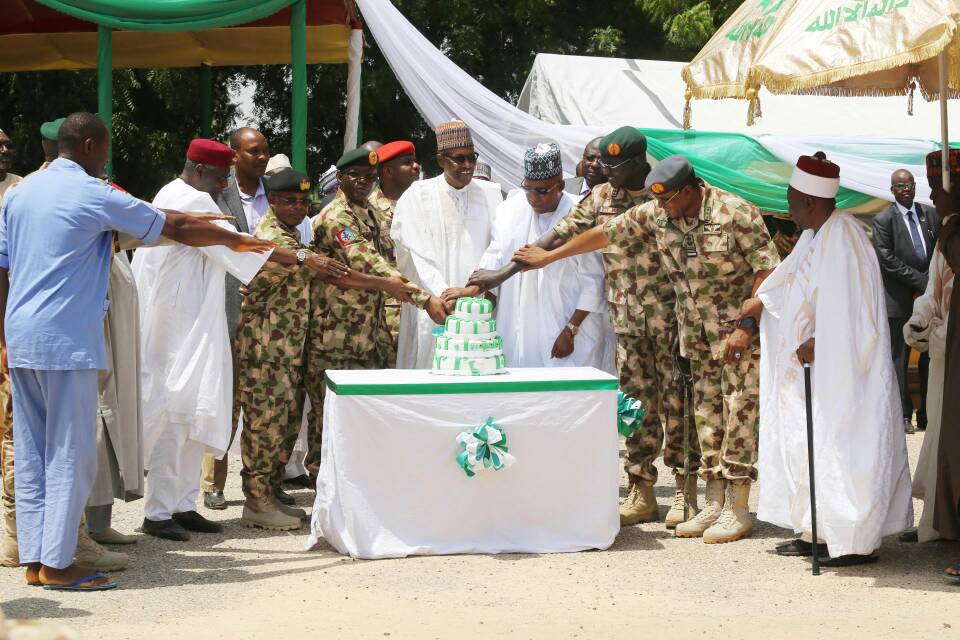 SK Usman, Maiduguri: In a very historic and exemplary show of leadership, today, Sunday 1st October 2017, President Muhammadu Buhari took time off to pay a surprised visit to troops of Operation LAFIYA DOLE in Maiduguri, Borno State, the memory of which would forever remain indelible in the minds of Officers and Soldiers of the Armed Forces of Nigeria.

On arrival at the airport, the President was received by the Borno State Governor, Alhaji Kashim Shettima, the Chief of Defence Staff, General AG Olonisakin, Service Chiefs and the Director General of the Department of State Services, Mallam Lawal Usman Daura and other top government officials. He immediately proceeded to Maimalari Cantonment where he inspected the Quarter Guard mounted in his honour by the Theatre Command, Operation LAFIYA DOLE.

Shortly after the inspection, he walked to the venue of the celebration, the 212 Battalion’s parade ground at the Cantonment where the troops had already
formed up. No sooner than he arrived, there was a lyrical rendition of the National Anthem by an internationally acclaimed Nigerian artiste based in the United States, Ms Abiodun Koya, who also rendered a beautiful song; “Lift Up Nigeria”, to the admiration of all.

The visibly elated Chief of Defence Staff, General AG Olonisakin formally welcomed the President on behalf of the Officers, Soldiers, Ratings, Airmen and Security Agencies in the Theatre. During the welcome address, the Chief of Defence Staff, thanked Mr. President for finding time to be with the troops at the historic occasion, inspiring leadership and support. He rieterated the Armed Forces of Nigeria’s unalloyed loyalty to the President and the Constitution of the Federal Republic of Nigeria.

Thereafter, the President addressed the troops in which he commended them for their loyalty, sacrifices and dedication to service. He promised to do all he could to support the militray to discharge their duties professionally.

The President along with Borno State Governor, Chief of Staff to Mr President, Chief of Defence Staff, Service Chiefs, Shehu of Borno and other dignitaries, as well a representative of the soldiers, Sergeant Owen Enyia, cut the 57th Independence Day Anniversary Cake before proceeding to interact with troops particularly those wounded in action currently receiving medical treatment at 7 Division Medical Services and Hospital.

The delighted troops led by the Parade Commander, Lieutenant Colonel Ibrahim Waziri, who is also the Commanding Officer of 251 Task Force Battalion, gave the President 3 Hearty Cheers to appreciate his coming on a significant day of our nation’s 57th Independence day anniversary.

The Borno State Arts and Culture also showcased cultural troupes who entertained guests and troops during the occasion. The Nigeiran Air Force added colour to the occassion through aerial display of variety of aircrafts including F-7Ni, Alpha Jets, L-39ZA, Mi-35, Mi-17 as well Agusta 109 LUH. The President also inspected some of the recently refurbished Armoured Fighting Vehicles (AFVs) and Artillery Guns of the Nigerian Army before he departed back to Abuja same day.

The refurbished AFVs and Artillery guns were part of the Nigerian Army’s drive to enhance the operational efficiency of its forces in Operation LAFIYA DOLE. It is instructive to note that some of the refurbished tanks were abandoned as fas back as 25 years, but were refurbished by the Chief of Army Staff, Lieutenant General Tukur Yusufu Buratai who has sufficiently maintained and utilised them to effectively combat Boko Haram Terrorists activities in the North Eastern part of the country Nigeria.

Indeed there is no gainsaying that the unexpected visit by the President has greatly boosted troops’ morale and gingered them up further as they clear the remnants of the Boko Haram terrorists hibernating in some isolated parts of the North East.

The historic visit by President Muhammadu Buhari pulled a large crowd and attendance of officers, soldiers and their families, as well very important personalities such as the Shehu of Borno, members of Borno State Executive, traditional and Security councils. Others were Senior military Officers from Defence and Services Headquarters, officers and men of Nigerian Police, the Nigerian Customs Services, Nigerian Immigration Service, Nigerian Security and Civil Defence Corps, as well as the Civilian JTF.