Belgore: Diezani seeks to be joined in money laundering case

A former Minister of Petroleum Resources, Diezani Alison-Madueke, has expressed an intention to be joined in a criminal charge involving a senior advocate of Nigeria, Dele Belgore. 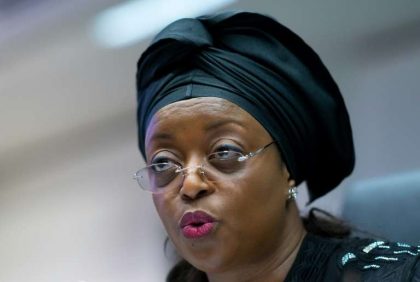 Belgore was charged before Justice Mohammed Aikawa of a Federal High Court, Lagos, alongside a former Minister of National Planning, Prof. Abubakar Suleiman.

The EFCC is prosecuting the accused for allegedly receiving N450 million from Alison-Madueke, who was described in the charge as being at large.

The commission had accused them of handling the said sum in cash – without going through any financial institution.

Belgore and Suleiman had pleaded not guilty.

When hearing resumed in the case on Tuesday, a lawyer, Mr Obinna Onya, appeared with an application seeking to join Alison-Madueke as one of the accused in the charge.

The application, brought pursuant to the Administration of Criminal Justice Act, sought an amendment to the charge against Belgore and Suleiman so as to join Alison-Madueke.

The lawyer submitted that, contrary to the declaration by the EFCC that the former minister was at large, she was in the United Kingdom and willing to return to Nigeria to defend herself.

Onya said that since Alison-Madueke ‘s name was mentioned in the charge, it would be against her right to fair hearing for the case to proceed without affording her the opportunity of defending herself.
Onya urged the court to hear and rule on the application before proceeding with the substantive case.

However, EFCC counsel, Mr Rotimi Oyedepo, said that the application was not ripe for hearing as he had yet to be served with it.

He was led in evidence by Oyedepo, who tendered two letters written to the EFCC as exhibits.

The court admitted the two letters.

However, Oyedepo’s attempt to tender a trail of electronic mail communication between Alison-Madueke and some bank managers was resisted by defence counsel, Mr Ebun Shofunde (SAN) and Olatunji Ayanlaja (SAN).

They submitted that the document did not meet the requirements of the Evidence Act.

Oyedepo sought an adjournment to counter the objection by the defence.

The court adjourned the case until Oct. 4 for continuation of trial. (NAN)