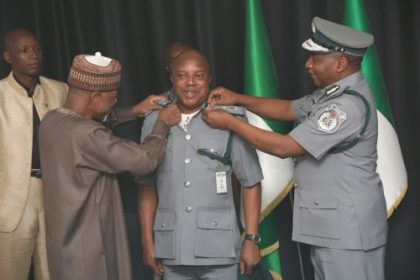 Edino Justice
Comptroller General of Nigeria Customs Service, Hameed Ali has given a three month ultimatum to the officers an men of the service to curb smuggling especially that of Rice. The Customs boss gave the charge in Abuja at the decoration of Deputy and Assistant Comptrollers General who had been on Acting capacity.

The promoted officers who are also members of the management team are five Deputy and eight Assistant Comptrollers general of Customs.

The Customs Boss while challenging the officers to see their promotions beyond hard work enjoined them to be grateful to God . He noted that their selections were based on strict criteria , and warned that smuggling must be brought to the barest minimum within three months.

The Comptroller General also commended the service for being the first to comply with the women Affirmative Action with 6 women in a management team of 18. A minute silence was observed in memory of the officers who lost their lives in the line of duty.