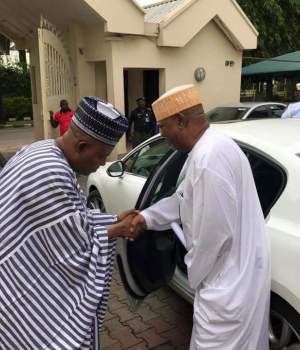 Shettima said “This is shocking. Coming few months after the death of Alhaji Yusuf Maitama Sule, the demise of AVM Mukhtar Muhammad is yet another big loss to the northern voice. AVM was a sound and eloquent statesman who cared about the competitiveness of the north in all affairs of the country.

It was out of his genuine passion for northern Nigeria that he invested in the establishment of freedom radio even when radio broadcasting is not known to be a lucrative business but rather a social service. He wanted to open a station in Maiduguri in spite of our challenges.

He was even at the Borno lodge early last month when we had meetings with representatives of Northern elders and the coalition of Northern Groups over issues of National Unity and he contributed positively to that meeting. He even offered to be available anytime there was need to bring together retired military officers to contribute in whatever ways in efforts to end the Boko Haram insurgency.

May Allah admit him into Aljanna Firdaus. My heart goes out to his family, the management and staff of Freedom Radio and our elders in northern Nigeria on yet another big loss.

During his lifetime, AVM Mukhtar Muhammad was one time Minister of Housing and Urban Development, member of the Supreme Military Council, military Governor of Kaduna State, one of the representatives of Northern Nigeria at the 2014 constitutional conference, member of the Arewa Consultative Forum, Chairman of Ahmadu Bello University Governing Council and Chairman of Kano and Kaduna based Feedom Radio.