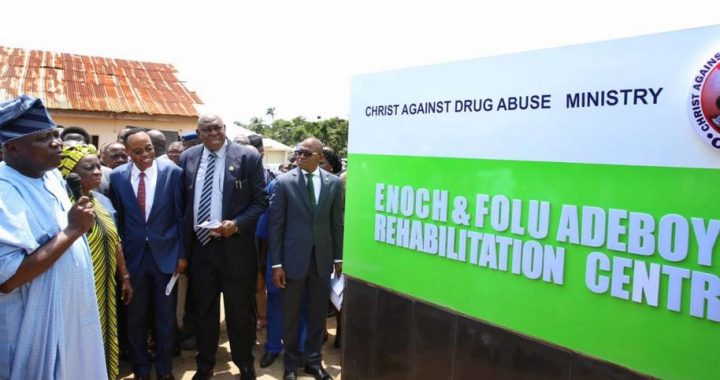 Gov. Akinwunmi Ambode of Lagos State on Tuesday urged parents, guardians, and caregivers to watch out for signs of drug addiction in their children and wards to tackle it fast.

Ambode said on Tuesday that drug abuse was harmful to its victims and threaten the peace of the society.

The governor spoke at the inauguration of the Christ Against Drug Abuse Ministry (CADAM) Rehabilitation Centre of the Redeemed Christian Church of God (RCCG), Araga-Epe in Lagos

He said that it was important for parents to be vigilant as drug addicts could be easily lured into crime which would ultimately threaten the development of any society.

”Let me use this opportunity to implore parents, guardians, and caregivers to be vigilant in order to detect early signs of drug addiction in their children and seek help from appropriate quarters before it gets complicated.

”On our part as a government, we shall continue to take preventive measures through public campaign programmes, especially among our youths so that they are adequately informed of the dangers of drug abuse, ” he said.

Ambode hailed the General Overseer of RCCG Worldwide, Pastor Enoch Adeboye, and his wife, Folu,  for joining in the fight against the menace.

He promised that the state government would support the initiative to achieve the desired aims.

”CADAM has, on its own, with its own resources, picked up, fed, sheltered, treated and rehabilitated many people who have been addicted to drugs,  and given them a new life.

”I am optimistic that many lives that had been compromised as a result of drug addiction will be redeemed, stabilised and given a new hope for a better and meaningful future, ” he said.

Earlier, Pastor Adebayo,  represented by his wife, said that the CADAM initiative was founded in 1991 by Pastor Ezekiel Odeyemi, a Special Assistant to the General Overseer of RCCG.

She said that it started as a department in the RCCG to visit homes of addiction victims and hospitals to pray and minister to their physical needs.

According to her, the name was changed in 1996 to enable a wider dimension as well as remove stigma associated with addiction – stigma directed at the addicts and their families.

”Since inception, the centre has assisted more than 2, 000 beneficiaries, most of whom have become professionals and well-to-do persons in the society.

”Over N200 million has been spent so far to put up the facilities.

”The centre will soon commence full implementation of educational and skill acquisition programmes for empowerment, ” she said.